Stock options : cube , or no cube? 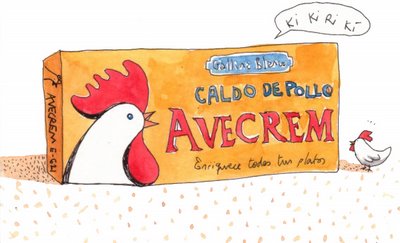 I´m a bit ashamed to admit it, but I resort to stock cubes every now and then.

I know they´re full of bad stuff, and that they´re nothing like the real thing, and that in two generations we´ll all sprout three heads.

I know all that. And I do make my own stock. I´m very fond of making vast vats of it, full of chicken bones, vegetables and herbs (and even pigs trotters, for extra jelly). I´m actually a bit addicted to the smug feeling of being on top of things I get when I ladle the golden liquid into containers that I then label neatly and put in the freezer. Which has its little problems, sometimes, but let´s not be reminded of them.

It just seems a shame to use it , sometimes. It´s so delicious, just as it is, with nothing more than a drop of sherry, or maybe a few noodles floating about. Something so whole in itself, to be suddenly whisked into a soup with very robust ingredients that will overpower it completely?

When it´s a clear soup, or a delicate risotto, then of course I want the real thing. I can really taste it there But in blended soups, or for dishes that are full of meat and vegetables anyway, I just don´t want to use it. I suppose I don’t have a very refined palate, but I can´t tell the difference in , say , a spiced pumpkin soup.

Sometimes I buy the kind of expensive, organic, fully healthful broth sold in cartons. But I can´t stock it, as my store cupboard is small. So cubes it is, for blended soups anyway.

And some points have to be given for speed and ease. And for graphic design. Isn´t this beautiful? Yesterday I had a nasty shock when I saw the new packaging. It´s awful, ugly, nondescript, and instead of the hen it has a bottle of olive oil. Because, if you please, each stock cube has 15% of every 8% volume made up of olive oil. Cheats and horrible people, I hope they bring the old box back. But I digress.

José is coming back today from Albarracín. The food there is of a decidedly robust type. They have the minimun temperatures in all Spain, so it makes sense to make the kind of casseroles that keep people on their feet while ploughing the rocky ground when it´s way below zero.
However, in summer, and minus the plough, it can be a little trying. I´m sure José will come back craving vegetables, and the kind of civilized food that some classify under “girl food”. He loves it, and it´s one of the reasons I love him so much. He´s just so easy that way, and so different from all the males in my family, firm meat-and-potatoes men.

Here´s a recipe for vichyssoise, his all-time favourite soup, that is fast, easy, delicious and failsafe. It´s a Thermomix recipe,slightly adapted from María A. Terry Muñoz´s book, but the quantities will be the same for a basic elemental version with a pan and an inmersion blender. The only advantage of the T is that it blends things to within an inch of their lives, and a chinoise is never needed.
Quantities are for four people, as long as one of them isn´t José, who will have three helpings if and when he´s allowed.

Check for salt, and add cream.
Most times, I can´t be bothered with the cream and just make it 400 ml. milk.

For the normal method, sweat the leek and onion in the butter and oil for five minutes, and add the diced potato. The smaller the better, as that will be quicker. Add the stock cube, milk and water, and simmer until tender. Blend, and maybe sieve.


Serve chilled, with chopped chives.
Posted by lobstersquad at 11:08 a. m.

No need to feel badly. We've all resorted to stock cubes at one time or another!

Don't feel bad about using something "artificial"...by the way changing formats it's awfull because you take time to get used to the new one, take for a example the Cola Cao...

I haven´t seen the new packaging yet! I usually buy "Bovril" and "Marmite" and I don´t feel ashamed at all!

I've used cubes before, sometimes refreshed with vegetables and herbs. Ain't no shame!

You're lucky your boxed stock is made with olive oil! Our canned broth is made with soybean or canola oil or worse! We only recently had decent boxed stocks available at any price and I do buy them, although I feel guilty about not making my own stock any more. My fellow food bloggers are motivating me to get back into the habit. Perhaps when the weather cools off again; there's something about a big stockpot in a hot summer kitchen...

Guru, tejal, you´re right, no need to feel ashamed. Good for us!
Rebecca: the ammount of olive oil in a cube is so small that frankly, I think it´s an outright con to put a huge bottle on the label. But still, better than other stuff, I guess you´re right
and as for a stockpot in the kitchen in summer, forget it.

I cooked his soup on Saturday and was surprised as to how loverly it turned out alh«though the cooking time (in my opinion) is not long. Thank you for a wonderful recipe. I live in the Algarve, Portugal and have the Thermomix in my kitchen since March 2007 - wonderful machine.
Take care and congratulations on you daughter.
Barbara

Hi Barbara:
I agree, maybe the time is a little short. Thermomix books often lie a little in that respect, but once you know that, it´s agreat tool , isn´t it? glad you liked the soup.