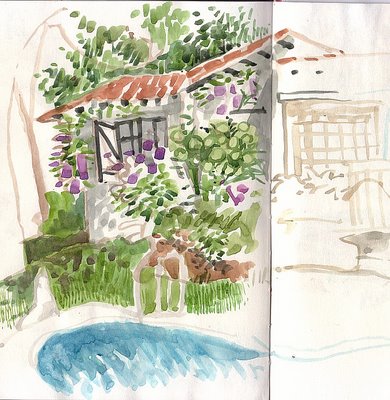 It´s a little early to be posting on a Saturday morning, but actually, I´ve been awake for nearly two hours. Very much a five-year-old on the first day of the holidays.
I´m going to El Pantano, the house where I´ve spent almost every summer. I haven´t been in ages, and even though we´ll only be there for 24 hours, I´m so excited that I´m hopping about , pretending I don´t want to be noisy but actually hoping the kettle wakes José up so we can leave already.
I´ll lie on the grass, walk barefoot on the pine needles ( a point of honour, and just as stupid now as it was when I was five), throw sticks at the dogs, swim, read and chat.
There´s a good chance I might eat. I´ll keep you posted.
Posted by lobstersquad at 8:54 a. m.

Can't wait to read the posts.. is it a beachtown?

look forward to seeing more illustrations of el pantano and of what you are eating! :-)

Gorgeous watercolor. I keep meaning to do something similar in my sketchbooks but I keep forgetting. Thanks for the inspiration!