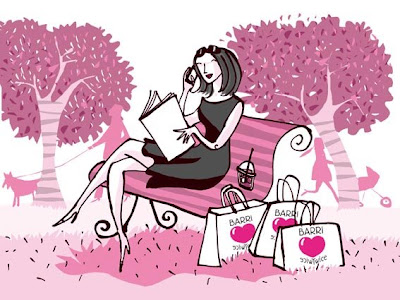 Takeout fusion of the highest order. They used to serve this as an appetizer in No-Do, which was a very happenning restaurant in the mid-90´s.

It´s as easy as blending some tomatoes and bread with olive oil and vinegar, and either frying up some crackers yourself or, much better, ordering them from a convenient restaurant that delivers. We are very happy to have a new one in the neighbourhood that´s so close and so efficient that food arrives piping hot and crunchy.

People go nuts for this, I warn you.

(And yes, again, the drawing has nothing much to do with it, but I like it, and it is sort of pink, like salmorejo) 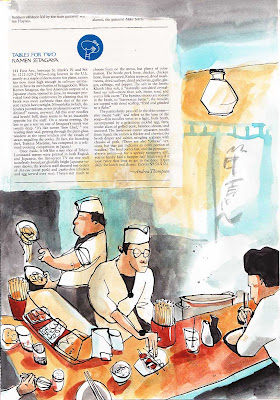 How much Japanese cooking can a person do, who vows never to stuff, roll, or fry? Quite a lot, actually. Whenever I say I love to make  Japanese food, people eagerly say, "oh, you do sushi and tempura?". I fix them with a stony glare, or a pitying glance, or maybe just brush an infinitesimal speck of dust from my sleeve and say "there´s a lot more to Japanese food than tempura and sushi, you know. And no, I couldn´t do either of those to save my life".

I am broadminded in my definition of Japanese, and anything that has soy sauce and mirin and wasabi and sesame oil is Japanese enough for me. A scattering of sesame seeds over some white rice, eaten with chopsticks, and I´m there.

One of our favourite lazy dinners is a bowl of white rice topped with cut up omelette (made with a dash of sugar), slices of avocado, sesame seeds and a bit of nori. Dip the egg or avocado in soy sauce and there you are. A quick, beautiful, really quite Japanese looking dinner.

I might also marinate some defrosted salmon to go along with that, or throw in some smoked salmon, which always goes so well with avocadoes.

What I had never made is real sushi rice. I found the instructions intimidating. What with the kombu, and the soaking the special wooden instruments, and the soaking then resting the rice, and all that palaver of "gently fold the vinegar into the rice with one hand while you fan it with the other"...I mean to say, what? I need two hands to fold vinegar into rice if it´s not all to end up on the floor, thankyouverymuch. Fanning, indeed. No sir, I thought.

But yesterday the crushing heat of Madrid summer brought the solution. I have an electric fan in the kitchen, and what could be easier than mixing the vinegar-sugar-salt into the rice, inside a normal baking tray, while the electric fan did its sushi job and also made me not faint from the steam?

So there you go. Ignore the punctiliousness and the ritualistic stories and don´t let that Japanese aura of perfection put you off. After all, they invented those little junky packets of ramen, so shortcuts must be quite common in Japan. Just get yourself some mirin and soy and sesame oil and sake and start playing. 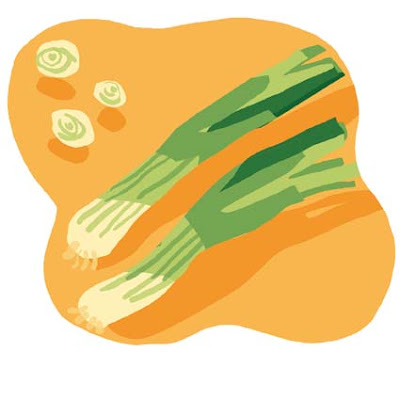 Potatoes and leeks go together like Simon and Garfunkel, and it´s just a shame to limit their summer partnership to vichyssoise.
My favourite new thing is to add leeks vinaigrette to potato salad. Isn´t that somewhat brilliant? Raw onions are very popular in Spanish potato salads, but I hate to be reminded of my lunch all day long. Leeks, though, leeks are elegant and unobtrusive, and upgrade your humble potato salad.

So here it is:

Boil your potatoes as you would, and in another pan boil whole leek whites until tender but still with a bite.
Cut the warm leeks in shorter segments, mix them with the warm potatoes and add vinaigrette thinned down with a little water. Chopped boiled eggs and parsley can never go amiss.
Posted by lobstersquad at 12:46 p. m. 8 comentarios:

Closed for the week 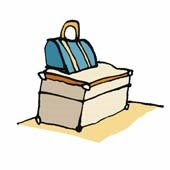 This is a post intended solely to turn everyone green with envy.
I am packing my brushes, pens, watercolour box, bottles, jars, papers and easel and setting off. I will be in La Granja, a beautiful place in the mountains. I am officially going to be working on a book about the gardens, but it will feel more like a picnic holiday.
Posted by lobstersquad at 11:25 a. m. 6 comentarios: 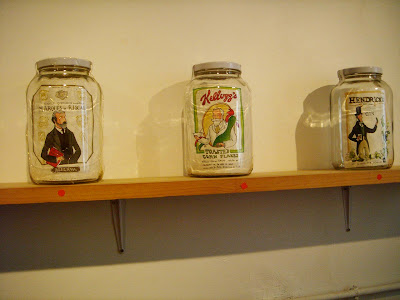 For those kind souls who asked how it went, here are pictures of the opening, thronged, as you can see. The subject was culinary, as you might expect, and the portraits of famous brand names of the pantry bottled in gallon jars sold like churros. It was all perfectly loverly.
Posted by lobstersquad at 11:04 a. m. 3 comentarios: