There´s a dinner party tonight at my parent´s house. Nothing to do with Thanksgiving, just a plain old dinner party. Odd in that my mother doesn´t approve of dinner parties. Lunch, yes. She´ll have hordes to lunch every day very happily, but she likes her beauty sleep.
But sometimes these things happen. And I have been roped in to make the puddings.
We´ve had very long discussions. My views on the subject can be summed up in one sentence: why have anything else when you can have chocolate?. My mother, on the other hand, is adamant. Fruit says it best, and among all fruit puddings, lemon bars are the ticket to paradise.
Both positions having been defended with strenght, in the end we´ll have both. I don´t mind baking two things, as long as I have help with the clearing up and a signed agreement that there will be some leftover when I go to lunch tomorrow.
So I´m not going to post the recipe for the prune compote yet. It was great, yes, but compared to the wonder of brownies and lemon bars everything pales.
Posted by lobstersquad at 9:31 a. m. 6 comentarios: 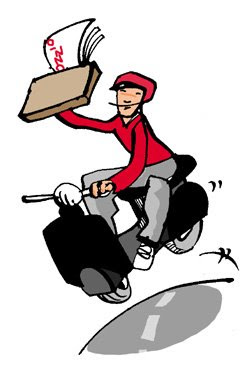 I deeply regret this, but feel it is my duty to inform you that the soup was inedible.
The leeks became a greenish slime, the barley a mess of waterlogged burst white forms. The meat was grey, and not all that tender. It didn´t smell remotely appetizing, and the taste was sweet and bland, even after a good dose of salt.

What did I do wrong? Who knows.
Next time I make leek and barley soup I´ll do it like I always have, boiling the grains separately, and sauteeing the vegetables first, and using stock.

Meanwhile, J was beginning to demmand his dinner much in the manner of his infant daughter. So, in the end he went out to get a couple of pizzas, and we ended the working week very happily negotiating strands of melted, gooey cheese and slices of spicy salami.
Posted by lobstersquad at 11:01 a. m. 11 comentarios:

Here is what´s cooking in the Lobstersquad kitchen right now. Will it be good? I´m sure it will. Laurie Colwin and Smitten Kitchen can´t both fail me at the same time.
I´m also poaching some prunes, following a Nigella Lawson recipe from How to Eat, but substituting Pedro Ximénez for Marsala. If it´s any good I´ll report back. I don´t see how it can be anything but good, though. PX, star anise, orange peel, cinammon, clove and sugar in a tea syrup as a poaching liquid; what´s not to like?
The drawing is nothing to do with anyghing, except that it concerns Don Quixote, which, like PX wine, and myself, includes an x in the name. More pics about it here.
Posted by lobstersquad at 8:02 p. m. 4 comentarios: 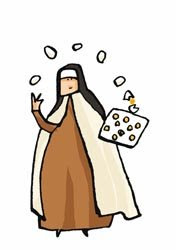 (This drawing has nothing to do with the subject, but I rather like it, and there´s no chance I´m ever going to post a recipe for yemas de santa teresa, so there you go. And on another off-subject note, here´s a blog I´m totally loving at the moment).

Eat local, seasonal. Buy from people who look like they have spent the past few decades buried in loam. Make a point of choosing the specimens that look more dubious, for they will be the most flavoursome and un-supermarkety.
Ha.
City dwellers fall for it every time. We´re such suckers.
Take me. I was in La Granja last May. La Granja is beautiful, a small town in the mountains, built around an XVIII century royal palace, with the most gorgeous forests and gardens.
Now, you´d think it would have been enough to walk around and take in the beauty of the flowering chestnuts, but I was heavily pregnant at the time, and so rather lazier than usual. So we walked around the town, and browsed the one shop that was open, a little grocery store.
I love that kind of shop. Time seems to have stopped in many of them, and you find all sorts of fascinating packages of stuff you´d have sworn had stopped production before Franco´s death.
The one famous specialty of La Granja are beans, called judiones, which might be translated as mammoth-beans. So I bought a packet, even though I think cooking your own beans is a waste of fuel. This was all in the "support the yokel" patronizing townie thing. And in the way of such exchanges, I was made to pay through the nose. I staggered out of that shop clutching my wallet, and the beans sat on my counter for a while.
And now, finally, when I´m cooking them, I realize that ye olde merchantman has evidently sold me some very ancient, Franco-era beans. They are still rocky after a couple of hours on the hob, and a good overnight soak.
I don´t know if they´ll ever get to any reasonable softness, but in the meantime, I am bored, and more than ever confirmed in my rule: buy beans in jars, and only ever cook lentils.
And don´t knock supermarkets, they´re not all that evil.
Posted by lobstersquad at 7:21 p. m. 11 comentarios: 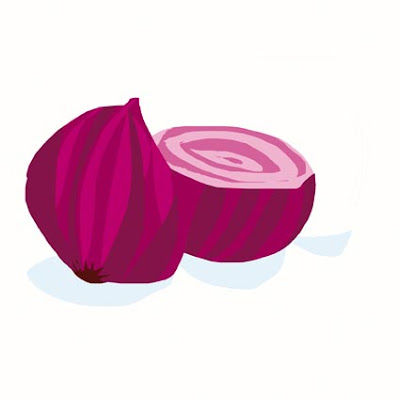 So when I saw a half-empty bottle of good Rioja that had been lingering for a few days, and spotted a couple of tins of Hida fried onions, I inmediately snaffled them for a trial at cheat´s onion jam.
Now, I´m not saying this is necessarily going to be my method for ever, but it works. The stuff still has to simmer for ages, but it does so unattended, and you save all the onion cutting time, plus your tears.
A jar of onion jam in invaluable at all times, for stirring into scrambled eggs, for sandwiches, cheese bruschetta, pizza, hamburgers, tacos , goat´s cheese salad or pasta, so keep it in mind.
The quantities, adjusted slightly:

Simmer on Varoma, with the butterfly on, for 50 minutes ( I might use less wine next time, and only give it 40 minutes, just so you know. This is work in progress)

If you´re using a normal pan, you´ll have to stick around and stir it from time to time when it´s reduced.

Oh, and by the way, Foodbuzz is officially launched now, and I keep forgetting to post about it. Check it out!
Posted by lobstersquad at 11:40 a. m. 8 comentarios: