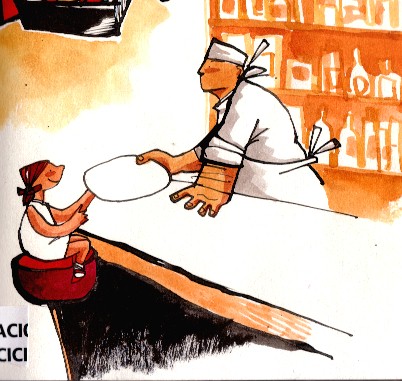 This is how hot it is:
Yesterday, I took a jar of roast tomatoes out of the fridge, with the vague intention of making some kind of salad for lunch.
But then I remembered the leftovers I´d brought from my mother´s tea party on Tuesday. So José and I had a quick lunch of salmon sandwiches, fruit salad, heart shaped sable biscuits and pickled cucumbers.
When I remembered the tomatoes, a few hours had gone by. I opened the jar to check if they were ok and they were bubbling! And smelling vaguely like whisky. My first thought was "how gross". My second "Now I´ll know what to do if prohibition comes". My third was "Let´s get the hell out and go somewhere with air-con".

We chose the cinema. I even loved the film, "Tiempo de valientes", from Argentina.

Once out of the deliciously cool cocoon we were faced with several options, but none seemed as enticing as diving into the first bar and asking for ice cold beers, calamares, and boquerones en vinagre.
If a day is too hot to work, blog, read or walk, it´s too hot to eat sensibly.

And if you´re wondering, what´s that picture got to do with anything? Well, nothing, really. I thought I´d do a neat tie-in somehow, but I couldn´t think of anything. But I quite like it , so up it goes. I promise not to be so shameless too often.

Oh and by the way, check out  Belly du Jour. They do a really good newsletter, and have had the amazingly good taste to ask me to contribute an illustration!
Posted by lobstersquad at 2:31 p. m.

hey! Hot weather is a perfect excuse for having a GREAT afternoon!!! Well done! (my mouth watered when I read boquerones en vinagre)

Love the pic!
It reminds me "the professional" (Jean Reno, Natalie Portman): tough but big-hearted guy cares for the little girl ...

wow, that is truly bizzare about your tomatoes!
of course, to get anything out of my fridge to go bad on the countertop i'd have to figure out a way to keep the fridge from suctioning closed so tight that i can't get it open
ah, summer!

Ah, the heat wave seems to be striking everywhere... that's crazy about the tomatoes!

Lovely illustrations, both here and on Belly du Jour.

It's tooo hooot here too!

I only can type a few words to tell you I love your today's pic. I send you a big virtual ice cream (I scream, you scream...) to refresh you after this great job!

wow, i love the way you mix words and colors.

Guru: hot weather started out as a good excuse but it´s likely to make me unemployed, at this rate...

Ann: lucky you. My fridge door is liable to opening up just because, and I have nightmares about it.

Helena: thank you. I really need it!

Le blog: don´t worry, I´ll try to work something out when I´m away. How can I survive without blogging is a different thing.

Snoopy6: thanks. I always think it´s fun to mix words. You seem to like it too, from what I´ve seen of blue button. It´s very cool.

I love that you included the picture at random even though it has little to do with the post. The one of the squash blossoms on Belly du Jour is fabulous as well!

It's hard to believe it can be so hot somewhere... when I'm so cold in my part of the world... New Zealand.
I've only recently found your blog and I'm loving your pictures and your writing, thank you for sharing with us!

hi! i am not even sure of the path that brought me to your site, but i just wanted to comment and say how much i enjoy it! especially the picture on this post - VERY fun.
and a jar of boiling tomatoes? now, that's HOT. here in AZ, you can fry an egg on the street - but i don't think we could boil a jar of tomatoes just sitting out - phew!
:)

LOVE the squash blossom illustration. (and your work in general, too.)
I also love squash blossoms desperately, which is very sad, really, since I have no real garden (for growing anything as extensive as squash) and no commercial source either. One year there were some in my farmbox, and all was bliss.

hi ximena, chanced upon your fabulous blog quite by accident and just wanted to say i am having a ball trawling through your archives ;) i must have been living under a rock all these months!

Lindy: Desperate shortage of squash blossoms here, sadly. Last year I was allowed to play with a whole kitchen garden for two weeks and had such a ball!
J- thanks for visiting, I´m glad you found this.

Sitting in a cool, dark movie theatre on a bright, hot afternoon is one of life's great pleasures.

I am mystified by boquerones en vinagre though. The translation I come up with is vinegar big holes but I have no idea on earth what that is. (Although if it keeps you cool, it's a good thing.)