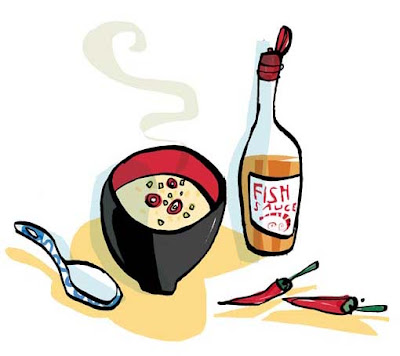 This is going to be a lazy post, by which I mean, I am not going to write up a recipe. The reason? Ethnic. I don´t feel I can speak with any authority or knowledge about Asian soups. I was born and have always lived in a country that used to have no immigrants, where all Chinese restaurants were called "La gran muralla" . They served fried rice and gloopy lemon chicken and if anybody ever asked for a soup there I´ve never met them.

Now things have improved, and it´s possible to have pretty good stuff, at least in Madrid. Most importantly, it´s possible to buy lots of ingredients that allow you to replicate many of the lovely things found in books and around the internet. And that´s what the beauty of my lack of Asian food education comes in; my standards are so low that I just looove what I make.

The fun bit with all these things is stocking up the pantry. A trip to the Mostenses market and its adjacent shops will have you coming back with bulging bags for very little money. I buy noodles, won ton wrappers, dried shiitakes, fish sauce, chili garlic sauce, Hoisin sauce, big bottles of soy sauce, sesame oil, bean sprouts, good cheap chicken, massive ginger roots, even chinese chives and bok choi and pak choy.

It´s a lot of fun. You can even brave the underworld and try to eat at the subterranean restaurant in the Plaza de España parking lot, which is always packed and so rather difficult. I hear it´s great, and hope some day to put it to the test.

Meanwhile, I´ll be trying to make won tons, and making lots and lots of soup. What kind? Well, on lazy days it might be instant miso soup. On more energetic ones good chicken stock with fish sauce, a hint of chili and some mint or chives. And for true soul warming stuff, filling yet light, the full on chicken noodle treatment, or a version thereof with scraps of leftover roast meat.

It´s a very accomodating patron, the noodle soup, and one that always hits the spot, so have a go.

Meringues to die for 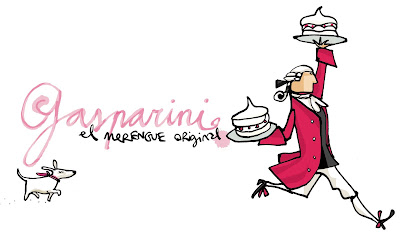 Here´s Gasparini, a blog I´ve been meaning to link to for ages. It has the most drop dead gourgeous meringues, and shares the recipes, which is lovely of course. Not that I could ever make anything so pretty, ever, at any time, but isn´t it lovely to see it? I have contributed to the all around prettiness, I like to think, in the blog header and the logos, so go have a look.
Posted by lobstersquad at 9:00 p. m. 2 comentarios:

Chicken soup in a relative hurry 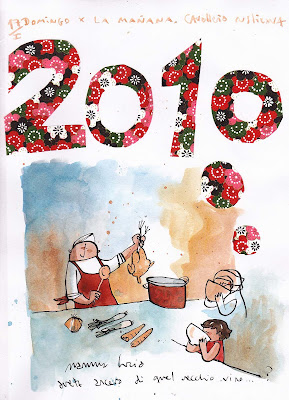 Ideally the freezer should never be out of some chicken stock, neatly parcelled and labelled, the sort that has simmered for hours and is full of jellied goodness. But we all know that is not always possible, and so, here´s a way to make chicken soup that will give you a steaming bowlful in thirty minutes or so.

Buy some chicken, preferably on the bone.Chop leeks and carrots, onion perhaps, celery if you like (I do), potato if you don´t want pasta later. Chop them small. This might seem counter productive if you´re in a hurry, but the smaller you chop the quicker they cook. Sweat them in a bit of oil, then add water and some good bouillon powder. I have some Marigold I brought over from the UK, but plain old Knorr is quite ok, really. And yes, I know it´s just flavoured salt, but what do you think is in those nice looking cartons of broth? Stock cubes and water, my friends, marked up to make us all look like idiots.

So, stock cube, water. Now the chicken bits. If it´s breast, then you don´t want to give it much time, but thighs or drumsticks can take twenty minutes´ slow simmer very well, by which time the vegetables will have cooked to an agreeably soft texture. At the end, throw in a handful of tiny pasta and take out the chicken. Let it rest a little and tear the meat, put it back in the pot, and taste. You´ll probably need salt, possibly some lemon juice to perk it up, definitely a dash of sherry to enliven it, a small cube of butter because it´s always a good idea, and a sprinkling of parsley to make it look good.

A bowl of this won´t keep you on your feet for a day´s skiing, but it´s just the thing for a blustery January evening. 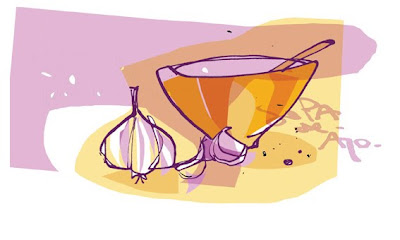 The problem with January is that you´re supposed to be all virtuous all of a sudden, even though you are still wrapped in a million layers of clothing, and it´s so cold that the mere thought of a salad can make tears freeze in your eyes.
There´s precious little point in even pretending that a big turnaround is going to happen. You might as well be realistic and eat something good and filling, because if you don´t, you´ll just walk intoLe pain quotidien and demolish some overpriced croissants and hot chocolate, and what´s the good of that?

Also, there´s a lot to be said for making food that keeps the kitchen hot and steams the windows. You can then wipe a bit off to watch the snow, which is always fun.
The best thing to have on hand is soup, of course, which can be all things to all people; filling, nourishing and light, all at the same time. I will be doing a few soup posts, because Pía and I are living on soup at the moment (oh, and pie, too, and cake, but that´s another just recreational).

One such is Scotch broth, which, in Laurie Colwin´s version is a beauty. Not physically,really, but in a general comforting bowlful way. I have given this soup to extremely picky eaters and to lamb haters and they ate it up and had seconds.

It´s very easy, too, as long as you do it over two days. If you don´t, you won´t be able to skim the fat properly, and it won´t be so good.
Just boil some bony cheap cut of lamb, like neck, with a few parsley stalks and the green tops of some leeks, and celery and onion if you have them on hand. Do skim well in the first twenty minutes because the broth can look rather grey and disgusting. Leave it for a couple of hours, until the meat falls off the bone. Pick the meat from the bones, and put it, with the broth, in a container. Next day, defat this well.
Chop leeks and carrots, as small as you can or feel like, and sweat them briefly. Then add the broth and the meat, and either throw in some pearl barley or, if you are like me and grudge the grain drinking up all the broth, boil it separately the day you make the stock, until it´s just al dente. Then add it to the soup until it´s as you like it.

I think no clear soup is complete without a dash of sherry, and a grind of black pepper, perhaps.
Posted by lobstersquad at 12:34 p. m. 5 comentarios: