A quick dinner for five 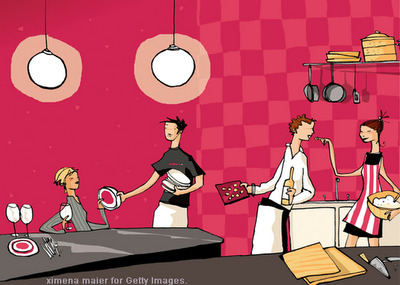 It´s not only I who am stressed and at my wit´s end with the heat of summer and the pressure of all the workload that has to be handed in before August.
My friends are all like that, too, or so it seems. We exchange a lot of emails that usually end with a hopeless "we really should get together sometime".
And then yesterday, magically, we decided to finally go ahead,and have dinner at my house. The decision was taken at 8, so there was just enough time to go to the market before they closed. I rushed out to buy ice , tonic and lemons, which would be needed no matter what, and ran over menu possibilities on the way there.
I´d have loved to try something new or spectacular, but there was really no time, so I opted for trusted warhorses ; focaccia, green beans in vinaigrette, and a pasta salad.
It´s a menu that can be done a few hours in advance. This time I didn´t have hours, but I did want half an hour´s quiet before they arrived, enough for a shower at least.
The first thing was to make the focaccia dough, and leave at least half an hour´s rising time. With the Thermomix that´s just a matter of pressing a few buttons.
While it rested, I boiled the beans, mixed the vinaigrette with some bottled mayo, sliced the tomatoes, and chopped the chalottes.
As the pasta boiled, I also found time to grate cucumbers and chop mint for a raita-ish dip with a bit of cumin and sesame thrown in.
Once all this was done, I put the focaccia in the oven and went off to breathe a little.
The dough didn´t rise as it should have. Maybe I didn´t leave it long enough, or maybe it was too hot in the kitchen. Probably the yeast was a bit old, having been in my freezer four months. So it was crusty and brittle, but tasted very good.
It was good to see everyone before we all disperse for the summer.
Btw, that drawing is nothing like us , of course, but the kitchen is very vaguely inspired on mine, which has red walls too.

250 gr. pasta in a smallish shape
2 big jars of beans, preferably dark, and if possible, two different kinds, for a prettier effect
200 gr. tuna in olive oil
Chopped parsley, and some other herbs if you like (chives are good)
Vinaigrette , as much as you like

Ideally, you should mix the vinaigrette some hours before, and leave the beans soaking in it. They will drink it up, and be very flavourful and very cold. When you add the hot pasta and toss them together, they both achieve the perfect temperature. Then all you do is throw in the chopped herbs and the tuna.
This can sit around for quite a while, but be sure to check for seasoning before you serve it. It seems to soak up vast amounts.
Posted by lobstersquad at 5:22 p. m.

My kid and I both read you from opposite sides of the Atlantic. Lovely drawings were the first reason.
The pasta salad is very similar to one I make, but instead of vinaigrette I use bottled or homemade marinated artichoke hearts with added lemon juice and olive oil to extend their nice dressing. Sometimes other crunchy or juicy veg are added. It gives picky eaters something pick over.

I just love your drawings! Could you suggest a site wherein I could learn more about drawing cartoons? Thanks.

Judith: I´ll have to try the artichoke hearts, thank you. I love that about you and your kid reading it from so far away, it sounds really sweet.

Loney kitchen: Thanks.
I don´t know any specific learning site, but Drawn.ca is a fantastic blog. They showcase different stuff every day, and it´s very inspiring. I think they might even have tutorial sites in the sidebar categories. Check it out.

Spontaneous gatherings like this are the best. No stress involved at thinking what to prepare. It just happens!