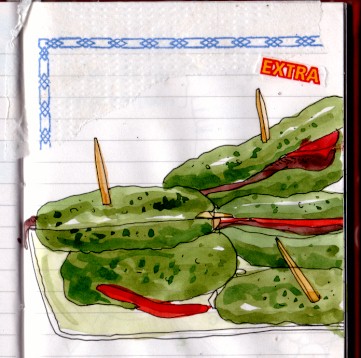 "In Spain the best
upper sets
do It

It takes a genius the size of Cole Porter to come up with a lyric that jumps all the way from Spain to Latvia in a sentence, don´t you think?

We´ve had a stroke of genius too, and for our holiday this year, we´re going to Estonia and Latvia.

After much mulling over, we came to the conclusion that it was the only place for us.
It´s different, even mildly exotic.It won´t break our bank. There´s plenty of coastline, but most of it is wild and empty-ish. The landscape is beautiful, but there are no hills, so I don´t have to throw hissy fits and refuse to climb. There´s plenty of history, and lots of old cities and castles, but none of the kind of museums that demmand setting up camp inside for a day, and make J groan.
I´m sure the food is great. My German blood is pretty submerged most of the time, but whenever I´m around rye bread or anything smoked, it bubbles up inmediately. I´ll be in heaven.

Yesterday, after shopping for mosquito repellent and road maps, we had a beer at  La ardosa . There, they serve a tapa that would do Cole Porter proud, in mixing the Mediterranean and the Baltic. A big pickled cucumber, sliced and filled with a bit of red pepper and an anchovy. They also have pickled herrings. The rest of the menu is fully Spanish, and very good.
It´s one of the oldest bars in Madrid, and very beautiful. One day I´ll have to go and draw it slowly, but for now, you can have a look at the tapa.
Posted by lobstersquad at 12:31 p. m.

This looks like a very interesting vacation spot! I would love to visit. Enjoy it!

if their food is anything like Croatian food, you'll be in heaven
Here's hoping the wine is delicious too!

I cannot wait to hear about your holiday. I've heard that Estonia and Latvia are beautiful and they're fast becoming some of the best vacation spots in Europe.

I'm very excited for you!

Hi everyone: Thanks, I´m really looking forward to it. Let´s hope I can make some interesting posts about them.

Hey! Here's Tatu from Mixirica - Brazil. All my grandparents are from Latvia! It's a beautifull little country. Make sure you eat some Speka Rausi (bacon buns) and some Piparkukas (pepper cookies)!
Have a good trip!
Tatu

Thanks Tatiana
They sound beyond delicious, I´ll definetely look for them.