Fear of frying:eggs and chips 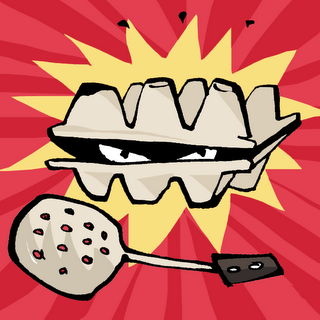 Sometimes I think frying is the national sport.
People love it. They fry letf, right and centre.
They fry fish, they fry meat, they fry dough. They stuff things and fry them . They layer fried things and bake them. They fry so much, sometimes you come out of restaurants or even people´s houses smelling like they fried you.

It´s supposed to be convenient, and widely assumed that things take seconds to fry. And they do, but only one. When you have to feed 4 or 6 people with things that have to be fried, that´s at least an hour of standing over a hot stove.

But people don´t mind that. I´ve seen this time and again. Someone turns up unexpectedly, and instead of being offered pasta, or soup, or a sandwich, preparations are inmediately started for chips and fried eggs.

Because if ever there was a love affair, it´s that of the Spaniard and his fried egg. They are the true national dish, and never mind paella. I dare you to find a bar that doesn´t have them on every plato combinado, nestling up to croquetas and russian salad.
It makes sense, in a way, since we do produce the best olive oil in the world, and olive oil is the best fat for frying.
Or so they tell me.
I don´t fry, myself. I´m too scared.

For the true fried egg of legend, the perfectly round, lacy crisp golden egg of platonic ideal, you need a pool of boiling oil. And the egg has to be dropped from a height, so it is full submerged and the oil can splash over it inmediately.

See what I mean? Only the brave. I just cannot do that. Things spit and hiss and splutter, and I lose my nerve.
You have to approach the fried egg with confidence. They smell your fear. If you don´t arrive at the stove with a masterful mind, the egg will sense it, and begin to sputter fiercely, and even maybe catch fire.

Not for me.
When I want a crisp potato, crunchy and golden, to break a creamy orange yolk, here´s my answer.

Preheat the oven on its highest setting.

Scrub 2 potatoes and cut them into wedges, without peeling.

Put them in a bowl with a spoonful or so of oil, a good pinch of pimentón (sweet or hot, as you like), plenty of black pepper, and salt.
Toss them so they´re slicked over with the oil, and put them on a baking tray and in the oven.

Wait till they´re cooked and crisp, around 20, but maybe more.
Eat them straight away, blowing on your fingers, breaking the yolks of the poached eggs, and making sure to scrape all the yellow goodness with more potatoes.
Posted by lobstersquad at 9:05 p. m.

LOVE your illustration... those eggy eyes just peaking through!

I absolutely agree. It's quite an experience to bravely stand by the pan while you hear those NOISES and feel the SPLASHING. Brrrr! But there's something even more risky: frying chicken. Don't you think?

No, no ... fried eggs and coated shrimps. Dangerous but delicious. I´ll try your recipe, though. It sounds good!

I always knew my heart was Spanish, I love to fry! Too bad it was never considered a sport where I grew up--I might have been considered an athletic child...

L: thanks
Lego: the very idea of frying chicken is too scary to mention
Guru: brave lady. I´d love to have those coated shrimps, as long as you´re the one cooking
Tejal: I´m so unathletic I don´t even go in for this one. Enthusiastic eating of anything fried is more my thing.

I feel sheltered, I've never heard of a Spanish fried egg. It sounds pretty different from the kind of fried eggs I make in my kitchen.

I recently overcame my fear of frying (which may not be entirely a good thing) but I don't think I will ever get to a point where I'd be ready to drop an egg - from a height! - into the oil. I'd be scared of the spattering and the resulting mess.

My name's Helena and I'm terribly scared about frying.
Everyone keep saying frying is the easiest thing about cooking. For me, it's the worst!
Guru, could you please, put something in the pan for me too, please, please?

I have traveled to Spain on many occasions and have come across a most simple dish (and very popular as most tables, I noticed ordered it) at some of the best restaurants: sunnyside up fried eggs over a bed of french fries. You would be surprised how wonderful this dish is but I do not seem to find it at so many of these Spanish restaurant menus (and I live in Southern California). I recently had the most pleasant surprise to find it at Chef Julian Serrano's Tapas Restaurant in Las Vegas at the Aria Hotel and Casino: DOES ANYONE KNOW WHERE THIS DISH IS SERVED IN SOUTHERN CALIFORNIA? I am willing to travel. Thanks!