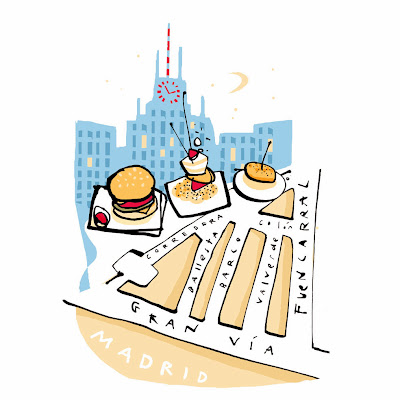 Brits are different from every else. They love to make a point of this in every possible way and so here we are, with a two week school holiday in October. It is mysterious and not all that convenient, but on the other hand, it's a holiday, so let's not complain.

I'll be flying home to Madrid, of course. And I'm already daydreaming about all the things I want to eat there. I won't manage them all, but I will try. Having the kids along will be a great excuse, because it's all a part of their cultural education, see?

Here are a few, in no particular order:

Churros from the café in Santa Engracia.

Mountains of ice cream from La Romana. Like, loads. Every day.

Almost anything from Fide, but to start with, smoked sardines, boquerones, mojama.

The empanadillas in front of the Prado.

A good old bocata de calamares is never a good idea but looks like it.

The tortilla from the bar next door to the Iglesia metro stop.

Pinchos and champagne at Cuenllas.

The puntillitas at Plaza de Opera. And on the way back, get some of that great lewerwürst from calle Arenal.

Heaps of the mustard noodles and the aubergines at Buen Gusto.

Roast tomatoes, mangos, avocados, greengages if I'm lucky and they're still around.

Porra, because tomatoes right now are begging for it.

Empanada gallega, which I will make from the lots of tins nobody bothers with at my parents' after they've eaten the sardines and the tuna.

Lots of cañas, of course (let's leave the kids home for that. Likewise, the Gin and tonic sampling).

Also, dare I say, a relaxing cup of coffee in la Plaza Mayor?