Icy drinks the size of a house 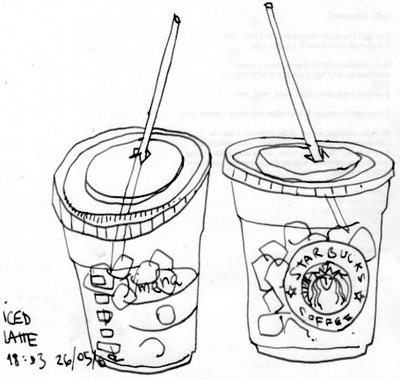 Can you beleive that only last year Starbuck´s was a relatively new and unimportant phenomenon in this town? You wouldn´t think so to see it now. There are like five of them in the Gran Vía alone. It´s kind of weird, and makes that bit in the Austen Powers movie about their taking over the world quite plausible.
When they opened, I thought , who will pay 5.70€ for a bucket of frozen milk? Well, who knew.
My sister Gadea says they´re so full because they´re the only places in Spain where it´s possible to sit sipping coffee without someone else very close eating garlicky chorizo and smoking cheap cigars. She has a point.
For me , these days their most alluring bait is the air conditining, by far.
I´m quite taken with their iced lattes. When I feel the urge for an ice cream but want to be mildly virtuous, I get myself an iced latte with skimmed milk.
The only thing I really hate is the whole palaver. You have to be so firm, otherwise you end up with lots of things you don´t want, like vanilla syrup, or extra shots , or the super gigantic size or who knows what.
The thing that´s quite fun is using my fake name of Maria Luisa. It´s so much quicker than going into a whole lengthy explanation of why I write Ximena with an x.
Posted by lobstersquad at 6:44 p. m.

I feel oddly connected to you somehow by the same Starbucks iced latte I buy here in Vancouver. I knew there was something positive about global corporate standardization! :)

I miss Starbuck! None here! Too bad for a coffee lover ...

Thank´s for telling about your double personality!

Since we're in the middle of a heat wave, an icy drink the size of a house sounds good to me right now, as does sitting somewhere air conditioned to drink it.

Perhaps Starbucks is on to something.

I have a fake name too, Simone
I usually accompany its usage with a fainly exotic sounding, universally Continental accent that throws people off
Good clean fun, non?

hello. i love your blog, and have been reading it for the last week or so, i thought i'd hello!

starbucks is everywhere. i quite like their frap's such as green tea and chai. do they have those flavours in spain too?

Huh, I've taken to using a fake name myself when in a crowded Starbucks or ordering food to take out from a restaurant. "Martha" apparently doesn't translate well over other a din of other voices or the phone, and that pesky "th" doesn't work in so many languages. When I go to pick up my thing, I never know if they've written down Marta or Marsha or Marcia or Maria or Mary or Martine. I've been saying Kate.

My friend, who's name is Warren, gets Juan, Won, Wan, Wong and Worn. I told him to call himself Pete.

Hi Stefanie: it´s all one big coffee brotherhood:)
Julie: definetely they´re on to something. I wish I had shares in it.
Doborah: yep, we have those fraps too. And thanks for visiting.
Guru: see below
Ann, Martha: seems I´m not the only one with a fake name! I knew it! It´s by far the most fun about the whole thing. It´s usually the case that people with normal names go for the all out exotic, while us with the weird ones always want a homely name.

I know what you mean about Starbucks popping up all over the place, it is happening here in Sydney.

Wouldn't you know, when I opened this post this morning it was with a grande iced latte in my hand! Somehow I never feel bad about patronizing Starbucks in Britain (where good coffee can be hard to find), but I make it a point of protest to never go to one in a country that has a strong local coffee culture. Something makes me sad to know they're opening in Spain now, though I certainly can't begrudge you for wanting your coffee experience air-conditioned and smoke-free...

p.s. they haven't gotten into that name thing yet in the UK, thank god!

Your drawings are expressive and lively they are stellar! I just happened upon your blog, just love it!

despite my urge to fight all the commercialism and financial ruin that comes from paying five bucks for a cup o'coffee, i really just cannot resist my weekly starbucks fix. can't......resist...
my poison? an iced grande latte with one pump of hazelnut. every time in every weather. mmmmmmmmm!

and they never get my name right - i never thought of using a pseudonym! great idea - i will try that next time. :)

I love Starbucks but I'm not a coffee lover so I have something else. Love the milkshakes in summer. I have the latte if I'm very cold in winter or I'm falling asleep while walking down the street and want to wake up.
Fake names are great, when I want to have an original name I'm called Leia like the Star Wars character. Just to have fun!