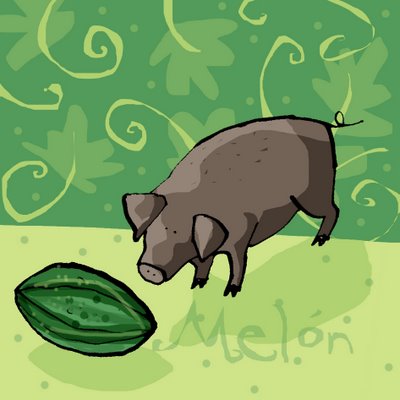 What is the starter you will find literally everywhere these days? A chilled soup that everyone is dishing up?
Chic hostesses will serve it in double handled consommé cup. If you go to a wedding, you will be given shot glasses with the concoction. At high end creative michelin starred restaurants you will be given it as foam. The old fashioned great eateries will give it to you as a palate cleansing device between your fresh foie and the partridge in chocolate sauce. Your cousin who just got married and at whose wedding you drank it, will give it to you a her first ever dinner party.
And it´s not gazpacho.

These days the new and trendy soup du jour is chilled melon soup with ham.

Mind you, it´s become so very ubiquitous, that it will soon be as old hat as gazpacho.But in the meantime, please welcome the great summer dinner-party solution, the no-need-for-a-recipe soup.

Basically it´s just melon , blitzed in a blender with a bit of lemon juice, chilled, and served with a few slivers of good iberico. But just a few pointers.

At the risk of sounding chauvinistic, I have to say that the ham should of course be iberico, not Parma. Parma ham is all very well in its way, but wouln´t look very good in this. What you want isn´t a pale flesh coloured slice, but a dark wine red tangle of Iberico or serrano shavings. They look beautiful against the elegant very pale green of the "soup".

Also , the melon shouldn´t be galia or canteloupe, but the rugby ball shaped, dark green mottled skin ones, called Piel de sapo, or toadskin (nice!), from Villaconejos. As my uncle Ramon says, at least once every summer, canteloupes are all pretty much ok, you won´t go far wrong, they´ll never be bad.But when you come across a really good Villaconejos melon, there´s no competition.They can be a little inconsistent,though, and that´s the reason for the lemon juice.
If you should find one of them slightly cucumbery underripe melons, the lemon juice will make it better. If it´s ripe and pefect, then leave it of course.

By the way, excuse me if my links are often in Spanish. It´s not always easy to find links in English. We´ve got a long way to go in self promotion yet.
Posted by lobstersquad at 11:53 a. m.

oh man, all these variations just sound heavenly! there is a far too hip tapas joint right around the corner from my apartment, and it is always PACKED with people, but i am SO addicted to the melon and jamon that they serve that i'll pop in, plunk down $4 and scarf it down in lest than 5 minutes
this is the perfect soup for me, i'll have to find a recipe in english!

how do you garnish with the ham? do you place it in the soup, or on the side?

I´m one irritatingly vague recipe giver, right? So sorry. the ham goes right inside. To serve you try to make it float, but after, mix it so you get ham and melon in every spoonful.

I agree with you completely about the ham!

Maybe it'll be old hat for you really soon, but it's brand new to me! I've never been served this soup before! And by the way, the sort of recipes you give are just the sort that I remember well and like to play around with, thanks!

yep, much like tejal, that's all i needed, thanks much lobstersquad!

So what kind of ham is iberico? Sounds really exotic.

Unfortunately I'm allergic to melons, but the way you describe it is so delicious, i'd be happy to risk an irritated oesophagus!

Ivonne: Ciao!, and praise indeed for our ham, coming from an Italian

Tejal and Ann: Thanks for the support. I also prefer recipes in the short but sweet range.

Jenjen: Iberico is the platonic ideal of ham. It´s serrano, but only from the Iberico race of pig, and it has to have lived out in the open eating acorns for longer. It´s the best, most flavorful, beautiful , expensive pig product. And it has the "good" cholesterol, by the way.
I don´t know if they export it to Australia yet, but look out for it.
And if not, you can use any good cured ham for this, basically.

I fell for this ham with a big thud on my one and only trip to Spain about 4 years ago. I couldn't get enough, and irritated my traveling companions discussing (unfullfilled) schemes to bring a ham home with me.

Unfortunately, to get Iberico or serrano ham here in Pittsburgh, PA, I would have to mail order it. I love the look of that melon, too. I'm trying to think what we might have that would be comparable.

I want to make some of this soup. the onion jam is not made yet, but will be soon.

Your post made me think: Good lord, I have had alot of chilled soups lately. I thought my town was just getting over foams. Sheesh. The other night the chef served an amuse of "chilled raspberry soup with peach and watermelon relish." It came in a sexy tall shot glass. I drank it. It was tasty. But I couldn't help but to think of the smoothie I had the other day... ( : |

I really enjoy your site. Your illustrations are so refreshing. ciao for now!

Here in northern California we often boast of how wonderful our fruit is, especially the expensive fruit from small organic farms. Chefs even go so far as to name the farm on their menus, because savvy diners know which farmers grow the best fruit. Whenever I spend time away from the Bay Area, I miss our delicious fruits.

I have to admit, though, that the wedge of Villaconejos piel de sapo melon I had last summer as a dessert at a restaurant, I forget which, was undoubtedly one of the best melons I've ever eaten. I was happy to discover that Spain's fruit, when it's good, can be as excellent as its hams, seafood, olive oil, wine, almonds, etc. You certainly are lucky, Ximena! That soup sounds excellent.