Five things about me 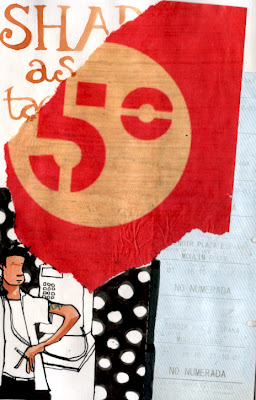 Now, the moment you´ve all been waiting for. I´ve been tagged by Bea in the "Five things about me meme", and here goes. I take it that by now you know that I´m thirty-one, Spanish, live in Madrid, work as a freelance illustrator, don´t fry, have a loud and ever-present family and a sweet and patient husband, J, who puts up with everything except the lack of rainfall.

My favourite country in the world is the Kingdon of Tonga. I have what may be called a little obsession with this place, and my fondest dream would be to attend the coronation fesvitities of King Tupou V this summer. This is hard, as Tonga is exactly on the other side of the world, but who knows, I keep hoping.

I can´t stand little noises. At home, the door to the kitchen has to be shut at all times, or I´ll be annoyed by the buzzing of the fridge (it´s two rooms away). Before I go to sleep, all ticking watches have to be inside drawers or shoes, and I´ve been known to request nearest and dearest to take them off when we´re at the movies. It´s really quite amazing that I haven´t been strangled yet.

I love opera, the unintellectual kind, that is, Italian XIX century. Bellini would be my first choice, but in the kitchen, it has to be heart-on-sleeve Puccini. Catch me unawares and you may surprise me in the middle of Tosca, furiously chopping and stirring while I belt out all the parts. Tomato sauce on the ceiling is a likely hazard.

I hate taking exercise, and can become very irritable when confronted with the new Nazis, a.k.a. the health and fitness brigade of "oh, is that butter?". Gyms are my idea of hell. However, I´ve recently taken up swimming, which doesn´t feel like excercise at all, since I don´t sweat, puff , fall about or feel silly in front of mirrors. I love going to the pool, but even more, I love telling people about it. The looks of pure disbelief are a lot of fun.

I once had tea with Barbara Cartland. For the uninitiated, she wrote over six hundred romantic novels of the silliest kind, full of swooning heroines, dark, brooding heroes and improbable adventures in exotic locations or haunted castles or both. My mother has a collection of about three hundred, all in danger of falling apart, since we´ve read them a million times. In 1998 she wrote Dame Barbara a letter, and we were asked to tea. A pretty surreal experience, may I say, sitting with the Lady in Pink in a beautiful country house that used to belong to Beatrice Potter, of Peter Rabbit fame. The tea, by the way, was excellent, and could have come straight out of one of her books. Finger sandwiches, shortbread, and Ceylon tea from a huge silver teapot which the 96-year-old authoress poured without so much as a shaking hand. Happiest day of my life, and never mind my first communion.

I´ll tag these seven other bloggers. I´ve been reading them for a long time now, but I´d love to know more.
Rachel
Kickpleat
Luisa
Monkey Gland
Elise
Lydia
Pille
Posted by lobstersquad at 11:48 a. m.

I knew I would have a good read when I tagged you. Brilliant. I adored your description of the gym! I once a conversation with my Primary Care Physician and he made a similar analogy ;-) Thank you, it was fun reading these tidbits!

"An invitation from TasteTV"

For your blog to be considered for the program, we ask that you complete the blog information survey at:

This survey will allow you to tell us more about your blog, its focus, etc., as well as make sure your information is accurate.

FoodBlogs.TV can be viewed on TasteTV under News, or at http://www.FoodBlogs.tv. It will also appear on TasteTV On Demand (on Comcast On Demand), on TiVO, and on affiliated websites and partner networks.

PS: If you read Japanese, you might enjoy this article about TasteTV on CNET.

Thanks for the tag! I loved reading your stories, as I always do when I visit your blog. This meme found me earlier, so here are five things about me:
http://ninecooks.typepad.com/perfectpantry/2007/01/memes_in_the_pa.html

My sister read Barbara Cartland when we were young. Was her tiny white dog on her lap?

Love your list, and I'm with you on the opera.

My musical taste is pretty broad, but I find that opera of all sorts (esp. Verdi) makes the best cooking music, and my stereo is right outside my kitchen, so I can pump it up, and sing along.

Second best, and a close runner up: Soul music of the 60s and 70s. Put on some Otis Redding, and you're really , you know, cooking.

Bea: thank you!
Callipigya: yes, she had the exact replica of that little dog on all her bookcovers! It was the funniest thing.
Lindy: absolutely agree, if Verdi and Puccini aren´t on hand, then it has to be Mowtown. I quite like Elvis, too.

I absolutely adore your writing.

Ximena - thanks for tagging me, I've completed the task:)
I enjoyed reading your responses. I've got a wristwatch that you'd hate, and I'm always covering it with my other hand when at concerts:)
And exercise isn't my cup of tea, especially things like running. Alpine skiing in Italy was fun however, and I quite enjoy badminton in reasonable doses:)

oh my goodness, it's taken ages but i've finally finished the meme task! here it is: http://everybodylikessandwiches.blogspot.com/2007/03/eeek-meme.html