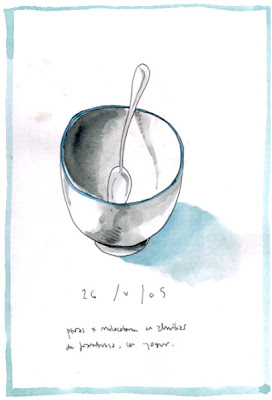 We are cursed with the alarm clock, but blessed with breakfast, don´t´ you think? After caffeine and a bit of wasting time reading the news, I want food. But I don´t want anything too in-your-face. Blandness is key. And what´s more bland than porridge?

Most people I know don´t like porridge, which is Spanish is called gachas de avena, an unappetizing name, really. Not that it looks any good. I must admit, the first time I saw it, at boarding school in England, I thought I´d strayed into the Oliver Twist scenario from hell. It turned out not to be so bad, though. The porridge was dickensian, but the school wasn´t, and I was allowed to stick to toast for the whole year I was there.

And that was that for a long long time, until this summer in Estonia I came across it again, everywhere, from the smallest b&b to the swankiest hotel. I fell in love, and had it every day, with bilberry jam (oh, the North and its berries, how exotic)

I started with Quaker´s oats, but soon switched to organic, and they´re so much better, they really are. I still keep the Quaker´s label stuck to the glass jar, though. Respect design classics.

The recipe is adapted for a Thermomix from The Ballymaloe Cookery School.
Porridge was traditionally stirred with a spurtle. It sounds like a Quidditch term, but it´s only the wooden stick used to stir porridge. I´ve decided that we could call the Th the Electric Spurtle. You don´t have to stand and watch your pot when your brain is only half awake. The Th takes care of all that, and then beeps. Neat, uh?

I don´t know why I bother to give this recipe, because inside Spain nobody eats porridge, and outside nobody seems to have a Th, but anyway, here goes:

Boil 500 ml. water, which is approx 4minutes at Varoma, speed 1. With the machine still on, sprinkle 80 gr. of oatmeal, then turn the heat down to 90º, cover, and program 11 minutes. Sprinkle some salt in, and scrape into two bowls. Don´t leave out the salt, otherwise it will be bland beyond belief, and it´s pretty bland even with it.
Inmediately, fill the machine with water. Dried porridge is no fun to clean.

Since my other half doesn´t eat breakfast, I stash the second bowl in the fridge, covered in clingfilm. It looks revolting one it´s cooled, Goldilocks had a point. But she didn´t have a microwave, which makes it perfect next day, and truly instant, and would have solved many a problem at the house of the bears.

I like to eat it with a splash of milk and plenty of brown sugar. I´m telling you, it makes up for all the alarm clocks in the world.
Posted by lobstersquad at 8:56 p. m.

Bring me the secondo one please.

I love porridge now, but as a kid I hated it and would sit at the table with a huge grimace on my face. Rumor has it that you can fry up the leftovers the next morning with butter...something I have yet to try!

ximena- I love how "hi-tech" this porridge sounds with the electric spurtle and all. I also just wrote about "gruel". I think I could be persuaded with a little bilberry jam...

Oh yes I absolutely love it! We actually have some every day these days, as we rediscovered it last week. Odd that we even forgot.

I tasted it for the first time last summer in Sweden... I don´t know if their way was wrong or the ingredients were not so good... But it tasted like flour... no sweet, no salt, no nothing but flour... :S Swedish flat bread was tastier ... u_u

I still have nightmares with one version they tried to make us, with berries... hell... it was hell!

Porridge is an excellent stick-to-your-bones breakfast. And yes, it's even better with milk and brown sugar. Now I just need to find a spurtle!

I've always wondered why some call it porridge and others oatmeal. For years, I thought there was a difference between the two.

Boarding school in England? ¡Qué romántico! (But probably only for someone who did NOT attend boarding school...) No wonder your English is so perfect!

Could you tell me what LOBSTER DELLAFANO is?
(see my picture at blog)
I have no clue

There are some foods that I love in one form but not another -- like carrots, which I love raw, but cannot eat when they're cooked. Oatmeal is like that -- can't stand it as porridge, but love it in baked goods. Your illustration always makes things look wonderful.

Hi, I just moved to Madrid and stumbled upon your blog when I did a search for restaurants here, it's a good read! As I am from Scotland, land of porridge, I particularly enjoyed this little story and wanted to add that porridge is also very good with chopped bananas and honey (raisins too if you like them!). Must go out and buy some porridge now...