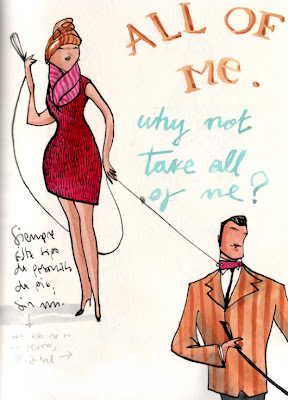 Read this article in the New York Times about couples in the kitchen? It´s terrifying. Apparently, all couples can be divided into alpha and beta cooks, and the power struggle is so bitter, that whoever survives a home renovation will succumb to the fight over who makes the risotto.

I´m obviously an alpha cook, also a control freak and wouldn´t know patience if it bit me in the leg. If that article´s true, I´m heading for divorce, downhill and no brakes.

Unless, well, wait a second. That´s if there´s a disgruntled beta cook peeling potatoes, right? But J is no beta cook. He´s not even an omega cook. The most he does in the kitchen during cooking time is ask where the bottle opener is.

We seem to have worked out a system where I cook, and he either eats the grated cheese, takes the lids off my steaming rice and finishes all the bread; or just stays out of my hair altogether and watches the Simpsons.

When we´ve finished, he does the washing up, and I either hover around telling him to make sure the water´s hot and the glasses washed also on the outside, or stay out of his way and sip mint tea.

Once he leaves the kitchen, glowing with virtue, I go back in and take down whatever´s stacked perilously, mop up the floor, and wipe down the cutting board, which he always forgets.

It´s a system. It seems to work. I think, in time, J may graduate to jobs like spinning salad or grating carrots, but what for? I kind of like being alone in the kitchen. I´m free to lose myself in a reverie while slicing mushrooms, or to sing and dance to the whole Grease soundtrack without embarrassement. It´s not like I cook complicated stuff that needs assembly lines, and anyway, I have a Thermomix to take care of things that need to be stirred constantly or chopped minutely.

So there it is, I´m an unrepentant alpha bitch, and not likely to change, either. But as long as the food´s good, who´s complaining?
Posted by lobstersquad at 8:44 a. m.

You two are the perfect couple!!!
You cook and J does all the washing. J doesn't gives his opinion about the way you do this or that and when you finish all your cooking and dining you can relax. He's one in a million!!! (maybe in a billion)
For your own good, please don't let him see this lines and don't let him go.

Sounds like you've found a system that works for both of you. I'm afraid there are two alpha cook wannabees in our household, and as we've only lived together for four months, we're still fighting for the top position. I seem to do most of the weeknight cooking, he makes me breakfast (I'm too sleepy in the mornings to do it myself), and we both try to show off what we can in the kitchen during the weekends:)

Lucky me, I am the only alpha cook in my kitchen. Now, if only my better half was a better dishwasher.....

Also, on another note, my turn to be curious about you (don't tell me you already did it as I feel shameful then). Anyway, I was tagged, and you are now:

I love these little glimpses of domestic life: you in the kitchen cooking while singing and dancing to Grease, J. watching the Simpson. And everyone eating very well in the end! The perfect system.

I read that article, too, and have to agree with the alpha beta thing. I, too, do the cooking with music (Grease optional) and my beta does the washing up, which is fine with me because, after all, isn't the messing up the kitchen the most fun?!
If you don't draw professionally you really should, it would be a shame not to share your talent. I link to you almost every day from my blog half to read, but half to see your beautiful, whimsical artwork!

oh, THANK GOD there's someone else like me out there who is an alpha cook and then also a nagging shrew when my kind, sweet, patient boyfriend does the dishes unprompted and has me hanging over his neck telling him that he needs to use HOTTER water, fer crying out loud, or some other indignity. Ugh, I don't deserve the man.

In the last few years, there has never been a debate about whose kitchen it is or if I'm the Alpha. But I found the whole tone of the article sad. I almost want to ask if the writer had recently broken up with someone or who was a long time Beta struggling against a terrifying Alpha.

For us, our time together in the kitchen is great. Yeah, as the Alpha, I do a good deal of keeping things going, but I know she can hold her own and has an awesome palette who makes everything I make better. So, I hope the articles not true either. I don't want to see you or me divorced.

you´re all right, folks, I really don´t deserve the boy. let´s hope the article people were just being overdramatic.
and bea, thanks for the tag!

I though it was needless to say he is a lucky boy to have at his side a girl like you, but I believe it's nice to hear (in this case read) it, so...

That is what it is about...peanut butter &jelly, salt &pepper, pancakes & syrup. Two to make a kitchen hum.

Hi Ximena - sounds like you and J make an excellent pair, and as you say, as long as it's all good... why not!

Am I the only girl out there whose man does not lift a finger in the kitchen whatsoever??? I am so jealous. (And slightly embarrassed that I let him get away with it.)