The Prince of Noodles 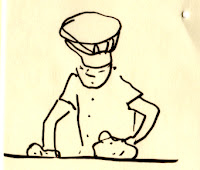 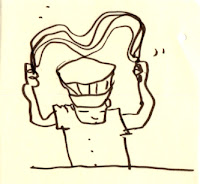 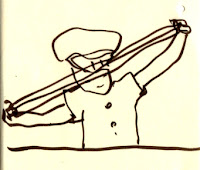 It´s my belief that every person should have a favourite Chinese restaurant in their own neighbourhood. It may not be your favourite Chinese in the city, but it´s the place you go to when you want noodles, want them now, can´t be bothered to open the fridge. It has to be cheap, and it has to be fast. It makes life so much better.

We used to have one like that. It was a tad far away to be considered inside our neighbourhood, but it was only a fifteen minute walk, so it really wasn´t far. It was all the things I said above, and it was also fun. The house speciality were hand made pulled noodles. The chef would stand behind the bar and knead, twirl and pull a bit of dough, flipping and twirling until he had a slithery mass of actual noodles in his hands. Fascinating.

Then one day we sat down at our usual table and everything was different. Instead of bowls, square plates. Instead of the brisk but polite service, a harried push and shove to have us out of the door in ten minutes. The refusal to bring us a jug of tap water (Madrid tap water is excellent) was the last straw. And why? Because on the next table there was a plaque. "The Princes of Asturias dined here". Ha. The heir to the throne went slumming one day, and the next the silly idiots decided they were an upmarket restaurant. Republican bubbles of blood clouding my vision, I paid my bill, and, furious, swore never to return.

Luckily for me, a twin restaurant has opened, nearer my home. It´s charmingly unfussy and the waiters smile, the noodle chef smiles and I smile. Everyone happy, and cravings for those odd-looking, springy, greasy and lipsmacking fresh noodles are only a five minute walk away.
If another royal comes looking for exercise of his droit de seigneur and tries to screw this one up, I´m chaining myself to the door, draped in the purple-red-yellow flag. I don´t care if the place is called the Noodle King. They´re from the People´s Republic of China, right?

I agree -- a good local noodle restaurant is a must! Since moving from Boston to the wooded part of Rhode Island, I've been without a local noodle house. So, I've learned to make my own favorite Chinese noodles!

This is my first visit to your blog and I love it! Great writing and pictures!

this is sooo true! i actually have a fav Chinese spot and a fav noodle bar, all within a block's radius; spoiled i know.

One of the things I loved most about Spain (and, indeed, most of the other countries I've visited)was the ability to walk out my front door in Salamanca and walk to just about anyplace in the city I needed to. Things generally aren't so here in the US because we tend to build OUT into suburbia rather than UP into the sky. It's such a shame. I wish I could walk to my noodle joint. :(

You're so right! Slurping up steaming hot noodles from your favorite local spot is so comforting and delicious.

By the way, fantastic stylistic choices on your blog.

A good noodle house is a must! In my old neighborhood, it was a vietnamese pho place. But, I gotta try these hand-pulled noodles!

I too wish I had a noodle house within walking distance. You're a lucky woman.

So right about the service there though! You say the sister set-up is just as good? Im there.