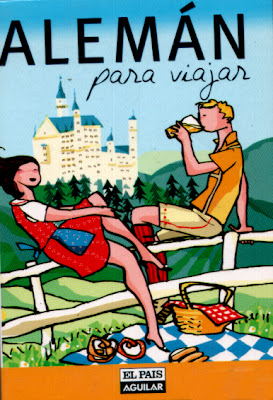 Every now and then I feel a hankering for German food. This always takes me by surprise, because I don´t feel at all German, despite my name. My great-grandparents came to Spain over a hundred years ago, but apart from them, all my ancestors are Spanish as can be. The only German thing in my childhood were the dirndels I was made to wear to birthday parties. Scarred me for life, of course, but that´s another story.

A quarter of blood ain´t much, but if you think of it in terms of actual blood, it makes for quite a few pints sloshing about inside me. It´s quite natural that every now and then I just have to have pale sausages with sweet mustard.

Luckily for me there´s a salchichería in c/Arenal that has wonderful stuff. It´s called La Madrileña, but don´t be fooled. Beyond the chorizo and the callos lies plenty of teuton goodness in the shape of all kinds of wurst, plus jars of pickles and mustards. Last time I walked away with a tin of sauerkraut on top of my usual package of sausages and leberwurst ( for daddy).

I did this recipe of Elise´s, but wasn´t too pleased. It was ok, but I think I was expecting too much from it. My mind was on some form of Romantic, sturm und drang mythic food, which boiled pork and cabbage just ain´t.

So I decided to start over, and sauteed two onions and carrots, plus a bayleaf and some peppercorns. That perked it up a bit, especially since to sweeten the onions I added caramel, which gave the thing a bit of colour. With some crispy roast potatoes and plenty of ketchup, it still wasn´t Caspar David Friedrich, but it was good.

There was still a lot of it, though, so I decided to ring the changes for a second helping. A couple of stock cubes, a generous litre of water, and a cup of barley that had been soaking overnight were added to the pot, which was put on a low flame for an hour or so.

This resulted in a wonderful wintry-looking soup, with the orange of the carrot and the pearly barley grains floating in a dense light brown broth. Sharp from the sauerkraut, yet sweetened by the added vegetables, with the meat taking second place to the barley, still al dente after all that while. I loved it. I just wish it was cold enough to really warrant such a hearty soup.

I´ve frozen two portions, and will have the last one tonight, maybe with a glug of sherry, to reflect both sides of my heritage.
Posted by lobstersquad at 8:21 p. m.

Still being able to surprise me. suena delicioso.

that soup sounds amazing!! you should have added an impulse purchased ham hock ;-)

I am mostly Spanish/Mexican but I absolutely love sauerkraut! So I keep thinking there must be at least one German hidden in the family tree somewhere.

That sounds like an excellent rib-sticking soup. It would be just the thing for the weather we're having where I am -- the high temp today will barely be above 0 Centigrade. (I like using Centigrade rather than Fahrenheit, it makes the temperatures sound much more dramatic.)

And I think more information about the wearing of the dirndels is definitely in order. Dirndels -- yikes!