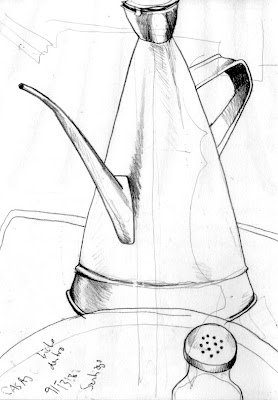 Of all beans, chickpeas are my favourite by far. I think it´s because beans can so easily become mushy, but garbanzos, being rock hard, hardly ever have that problem. Of course that´s what makes cooking them such a lengthy pursuit, so you can guess that this is another of those beans-in-a-jar recipes.

It´s quite an oddball recipe in the Spanish canon, in that there are no pig parts lurking around. It´s just chickpeas with spinach. You´ll find no panceta, chorizo, morcilla, ear, snout or knuckle. Also, it´s eaten with a fork, usually served as a first course or a tapa, not as a hearty potaje. I love it on toast doused with extra virgin olive oil.

Of course in a normal country it would be a side dish, but you know how it is here. Orphan hunks of meat or fish, or else beans escorted by a phalanx of cholesterol.

Which is not to say that you have to do it our way. As you can imagine, it nestles very comfortably up to Moroccan or Middle Eastern food, and personally, I think it´s a winner with roast lamb as served in Burgos, but don´t let them hear me say so, or I´ll have my citizenship taken away.

A note about proportions. I´ve used the ones normally available here, that is, 185 gr. jars of chickpeas, and 400 gr. packets of fresh spinach. But it´s a pretty accomodating dish, and you can change the quantities to suit you or your grocer. At most, you´ll find you have garbanzos con espinacas instead of espinacas con garbanzos.

As for the half cup of tomato sauce, well, I know it sounds like an irritating thing to say, but bear with me. You don´t have to use tomato in this recipe, but it´s so much better with it. And if you have half a jar of tomate frito left over, I´m sure you can find a use for it. So go on, try it.

In a biggish pan hat has a good lid, sautee the onion in olive oil, and when it´s transparent, add the minced garlic and cumin. Let it cook for a minute, until it´s fragrant.
Now add the spinach, tomato, and drained chickpeas.This is a messy procedure, as the spinach takes up a lot of room, but it will collapse quickly, so just move it around, clamp the lid, and after a minute, shake it around. The idea is that the liquid the spinach gives out is soaked up by the chickpeas, so there´s no sogginess. In no more than five minutes, it will be dark green and soft, but very juicy. Taste for salt and cumin, add a splash of Tabasco, a squirt of lemon juice, and you´re in business.
It tastes better lukewarm, so try not to be greedy.
Posted by lobstersquad at 5:19 p. m.

This looks absolutely delicious! And the leftovers would make a wonderful soup, too.

Oh, delicious. I have a recipe from a Middle Eastern restaurant for something that looks almost exactly like yours - but espinacas con garbanzos is so much prettier than Chickpeas with Spinach - yawn... Of course, I just saw "Volver" last night, so everything in Spanish sounds prettier right now.

My abuela used to make a dish very similar to this one but she would use pinto beans(very popular in New Mexico) instead of chickpeas. I love chickpeas, so I'm anxious to try your recipe.

This looks wonderful. Simple and delicious.

Nice! I have a similar recipe that I've been meaning to try, only it uses kale instead of spinach. This looks much better.

Luckily i have a bit of Dauro de L'emporda left that i picked up in Spain last year. Although I don't know if i can douse my toast in it, it's running out so i have to ration it carefully :(

I'm so jealous that you don't have the same problem!

this sounds muy sabroso! i love chickpeas, i will give this a try.

Ximena, you always seem to be reading my subconscious, writing about things I'm craving before I even know it myself! Too bad I don't have any tomate frito lying around, but then that would be just too coincidental, don't you think?

This is great. I love garbanzos with Spinach, but I've never made it with tomato sauce. I always make this a little spicy. I will try your recipe next. In Mexico, they sell roasted garbanzos (still in the pod) on the street. Its served with a squirt of lime juice and a generous amount of hot sauce. Fun to eat and so delish.

I love how you talk about your fellow countrymen and their pork obsessions... It always cracks me up! I'll have to show this recipe to the boyfriend. Sounds like one that's straight up his alley! There's a Middle Eastern grocery near our new flat that sells 4 (four!) kinds of roasted & salted chickpeas for snacking. They're truly delicious and driving us towards a serious garbanzo obsession.

Yes! Chickpeas. I can't get enough of them. This is a great little recipe -- thank you.

After making this, I just have to gush. I don't think I can eat spinach any other way again.

I'm so excited! I ate this constantly in Sevilla last summer and was so bummed when I got back to the States and couldnt find a recipe anywhere. Then I came across this...definitely on my list for this week. Thanks!

Its really good with some curry powder added and then served over rice!