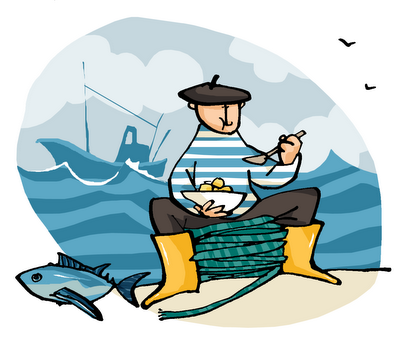 I think it´s about time we post a little Spanish regional cuisine.
I hardly every cook real Spanish food. For one thing, it´s what I eat mostly everywere else I go. And for another, most dishes involve copious doses of chorizo, or lots of frying, or both.
I am not a health nut, I just don´t like chorizo all that much. And I don´t like to stand over a stove, flinging things into hot oil for hours, when I could feed a crowd with something that takes care of itself in the oven.
There are a few exceptions, like fideuá, pisto, and escalivada, that I make quite often. And my favourite, marmitako.
It´s a fisherman´s soup from the Basque country, up north. Originally the fishermen would make it in their ships when they were out for bonito.
Sticklers can have a field day with this recipe. Purists (like my father) insist that only potatoes and onions were carried abooard.
Others, (like myself) say, yes, probably, but what´s wrong with a basic elemental sofrito with tomatoes and peppers?
Whatever the case, here is the recipe. Nobody argues about the fish, which is bonito del norte, and a beautiful beast indeed.

Cover the bottom of a heavy pan with olive oil. Sautee the onion and garlic. When they´re slightly transparent, add the pepper, and a couple of minutes later, the tomato, and the salt.
Leave it to become a pulpy mess, around 15 minutes. Be patient, because it will be much more delicious, and you´ll be peeling the potatoes , anyway.
Cut them into chunks, but don´t cut the whole way. Make a small indentation, and turn the knife so that the potato is torn, not cut. This will make the starch seep into the broth and thicken it.
Put the potatoes into the sofrito, and add the stock. If it doesn´t cover, add water.
Let the potatoes cook. It will take around 20 minutes.
When they´re done, put the salted tuna chunks inside. Cover, and wait 5 minutes. If they´re not too big, they should be cooked to perfection.

If the broth is very liquid, crush a few of the potatoes in a bowl, and put them back.

This,with a green salad and some crusty bread, will serve four hungry people who´ve been out fishing all day. Or six poor citybound souls, if one of them has brought pudding.
Posted by lobstersquad at 6:26 p. m.

hi lobstersquad, trust me, the original versions made of leche de oveja is really really tasty ;) love your illustrations! I've a softspot for artistic talents :)

Hello! I just found your blog through a few links--your illustrations are lovely, full of sweet little details like the fisherman's full mouth. Oh I love them!

What do you use to make them? Besides the obvious: talent creativity etc.

I use an old fashioned nib pen, that I dip in waterproof indian ink. I then colour in watercolours, or with the computer. The fisherman illustration is coloured in photoshop.
love your blog, too.

lovely. Will you illustrate my soon to published picture book? Em, I haven't written it yet, but when I do...=)

Sure, count me in.

Hi Ximena, your illustrations are incredible! I'm so glad you've started a food blog out of Madrid, one of my favorite cities.

Your recipe for marmitako sounds similar to the one I make, down to the method for breaking the potatoes into chunks with a knife (although I usually use a green pepper and add a splash or two of white wine).