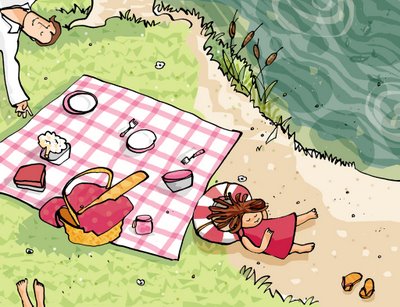 Aren´t picnics the best?
Any kind of picnic, wether it´s a full dress affair, with champagne cooling in the river and a wicker hamper, or a simple sandwich savoured on a park bench while reading Vogue. The best.

This spring has been quite picnicful.I´ve had a Retiro park picnics of cheese and gazpacho. Freesbee tossing and tuna sandwiches, plus ice cold beer on the beach at Cape Trafalgar.An elaborate meal for six, with the dogs, in the country, under the encinas.

Maybe I´ve been brainwashed by all the Enid Blyton I read as a child. In her books, the phrase "everything tastes better outdoors" is mentioned at least twice. Always followed by the same litany; ham sandwiches, chocolate cake, hard boiled eggs and ginger beer.

So it may be brainwashing, or maybe things really do taste better outdoors. It doesn´t need much for a meal to be memorable. The setting is doing most of the work for you, and bread and cheese, a few cherries and some wine will be more ambrosial than a meal you´ve slaved over for hours.

However, sometimes a little more is called for. This is what I make. High-impact, low-effort sandwiches that travel well,but will also do if your mother´s friends are coming over for tea to check out your wedding china.

Mix the cream cheese wiwth the chopped herbs ( quantities up to you. I like mine pretty green), the zest and juice of the lemon, and lots of freshly ground pepper.

Spread on 10 of the slices, all laid out on the table. Top with the salmon. Spread a minimum of butter on the other 10 slices, if you like.
I cut these sandwiches in triangles, with scissors.

The picture is from a book I illustrated a couple of years back, called "Marcela". The title role is a little girl who loves to eat cauliflower when on a picnic. Takes all kinds.
Posted by lobstersquad at 1:40 p. m.

That sounds like a most elegant and quite delicious picnic sandwich.

I agree, things taste better outdoors, but then I might have been brainwashed by those same books--I was completely obsessed with Enid Blyton...

This is such a cute blog! Love your drawings and style! Very well done. Will become a fav that I want to visit!

Hi,
I came over from Brett's blog - your page is so charming and I love the illustrations! I will be back again!

you are just TOO fabulous. Oh my god. I love love love your drawings. They are completely charming. Thank you so much for finding my blog and leaving me a message. I might not have found you! How exciting.

I grew up reading Enid Blyton's books and my daughter has done the same as well. Her son has his own version of Enid's elves, Tashi, and he loves to read them.