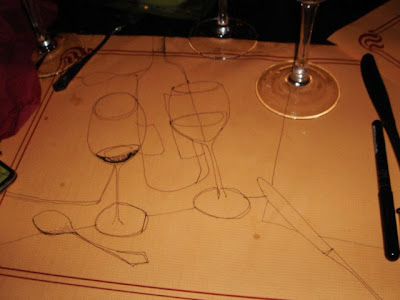 This is one of my favourite soups. I know it doesn´t fit in with the whole summer thing, but what do you know? July in Aberdeen is very much like the most blustery October Madrid can throw at one.
It´s very simple, thick and creamy, a properly bolstering soup that will fill and warm you up without being heavy. And, need I say, in a pressure cooker it takes very little time to cook. So put this one away for autum, and thank me later.

Quantities can vary without spoiling the result, but this is the usual:

Chop an onion and a clove of garlic, add some cumin seeds and leave them to soften while you peel a couple of carrots. Throw them in, coarsely chopped, followed by a half kilo tin of whole plum tomatoes with their juice. Fill the empty can with water, add that, and a cup of red lentils. You might want to throw in a stock cube.
Leave it to simmer until the lentils are cooked, about half an hour, or ten minutes in a pressure cooker.
Puree with a blender and taste. It will probably need salt, a dash of butter, some sherry and certainly the juice of half a lemon. Garam masala is a very good adition, if you have some around.
Posted by lobstersquad at 8:11 p. m.

Love the blog - your illustrations are beautiful:)

I am a long-time fan of your blog- this soup sounds delicious! By the way, a Spanish friend told me that Spanish people usually puree their lentils after a day or two... Is this true?

xps: es que se desintegran ellas solitas, muy apañadas.
freerangegirl: thanks!
Johanna: absolutely true. leftover lentils aren´t very exciting, but if you take the chorizo and things out and puree them with a little stock, it makes them go a little further. mind you, it´s very much the sort of thing every Spanish child hates. Boring food. But delicious, I now realise.

Wow. That recipe sounds easy and delicious. Love your illustrations! Congratulations on being a blog of note! If you have a minute, drop by my blogs: Levonne's Pretty Pics and A Camp Host Housewife's Meanderings.

I found your blog from blog of note. It's amazing!! I love your paintings. It's really the perfect time to know something about Spanish food.

I tried the lentil soup recipe but
instead of garam masala I used
tumeric powder. I loved it.


Any substitutes for Garam Masala?

usjen: I don´t always use garam masala, only if I have it. usually the cumin is enough. but if you have it, pimentón is also very good.

good, simple image, what do the special wool over one billion

am making this soup this week...beautiful illustrations...love the simplicity of your site...i will be back!