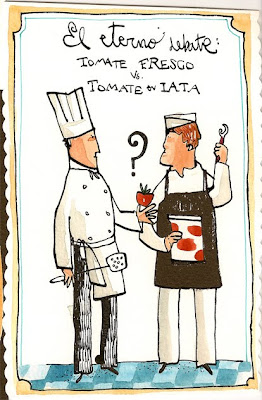 Here´s a speedy version of this tomato sauce. A good, honest, solid, serviceable, auxiliary sauce. Not a "you´ll think you´ve died and gone to heaven in Sicily" sauce. Just a sauce, like the one you wish could be found jarred. It takes about half an hour to make but tastes like it simmered for far longer.
So here it is: Put two kilo tins or four half kilo tins of peeled whole plum tomatoes, with their juice, in a pressure cooker. Add a peeled onion cut in untidy chunks, one or two cloves of garlic, salt, pepper, sugar, and if you have parmesan rind, that, too. A generous glug of olive oil, 1/3 of a cup or so, and that´s it.
Lock the lid, bring it up to pressure and leave it for 2o minutes, or 30 if you like.
Once done, you´ll think "oh, this isn´t working" because you´ll see tomatoes floating in a lot of liquid. But here´s what you do:
Take the liquid and put it in a sepparate container. You´ll get about three cups. This is a strong tomatoey broth that´s perfect for soups (just add a can of chickpeas, some uncooked pasta and frozen spinach and cook until the pasta is done).
The tomatoes and onion and garlic you puree in a blender. They´ll turn a bit orange, but who cares?
You now have about four cups of an excellent sauce to spread on pizza bases, add to chickpeas with spinach, or to Godfather part III sauce.
And please don´t boast about your luscious juicy fresh tomatoes everywhere around now it´s summer. Just don´t, ok?
Posted by lobstersquad at 11:55 a. m.

Okay. Sounds perfect. I don't have a pressure cooker, but I'm sure that just means extra time on the stove.

I liked the art below.

Canned tomatoes it is. Quick and easy
Ivan Cavric