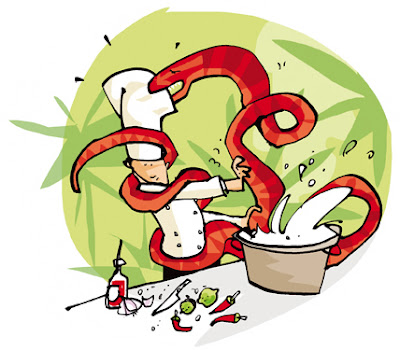 porridge (and oats in general)

These are some things I didn´t use to like very much, or not at all, and that I now love. If asked, I´ll probably say that there´s nothing I don´t like. Altough I don´t much like cilantro, I´ll eat it. And I don´t love chewy textured things like tripe, but I´ll very happily dunk any amount of bread into the sauce of a plate of callos.
I think it´s more fun to like everything, and try everything. Even if what happens is a battle of wills with a waiter at some foreign restaurant, and that mettle-rising "You won´t like it". You´re brought a plate of glutinous soy (didn´t like) or duck´s feet (ditto). And you lose face, but at least you´ve tried.
I used to have rules, like "no ice cream and sorbet together". But I found out that J will routinely ask for chocolate and lemon, together. So now I think it´s rather charming, in a slightly childish, can´t-choose way. Even do it myself, sometimes, so add to the list

ice cream next to sorbet

Basically, now I think there are no rules and no set-in-stone dislikes. As long as it´s well cooked, that is. I´d much rather eat snake, if it´s lovingly and well prepared and I´m in the Mekong delta and carried away by the whole daredevil experience, than a packaged-ready-frozen and then badly fried croqueta.

There, that´s my philosophical input for Monday morning.
Posted by lobstersquad at 11:48 a. m.

The wisdom of experience!
I can't remember when I didn't like honey or blue cheese.
Gave up cucumbers for a while after my mom upchucked them on me once.
Always liked oatmeal. Cabbage came late.
Wanted to try membrillo for so long, loved it when I did.
Now must search out mojama.

For me, blue cheese -- any strong cheese, really -- is a recently acquired taste. Also hot sauce and spicy food generally -- never ate it when I was younger, and now I can't get enough of it. As for chocolate and lemon, the combination is a classic in Italian ices, the kind you buy in a small cup from a cart at a street fair!

i fully agree with your monday input. much more fun to try things our and then decide you don't like them. altough cucmber: didn't like them - still don't (except if they are in tzatziki ... so i guess that goes back to your point)

Cabbage is one of very few foods that I don't really love, but I'm sure I will after making your cocarrois!

In about the past 5 years or so, I have become much more adventurous in my eating - apparently I'm becoming more open minded as I get older. :)

Funny you should mention cucumber - I've liked them on their own for years, but to me they always had such a particular taste to them that I couldn't really wrap my head around them being paired with something.

Then I had a smoked salmon pinwheel perched on a slice of cucumber. YUM.

I really like your blog and this post in particular. First time commenter. I may credit and/or reference your post as an inspiration for listing my acquired tastes. I think it's so interesting to find out what people like to eat. Membrillo, I have not had in years and Mom used to make it all the time!

I´m with you on this one. Luckily, tastes do develop with time. For instance, I couldn´t stand brusel sprouts or broccoli and now I love both. I still have a strong aversion against blue cheese, but I´m open to the idea of liking it someday.
The key is definitely in eating food the right way, in the preparation, quality and flavor combination (take beets for instance, not a true fan, but when combined with green apples or goat cheese, you really can´t go wrong).

I've still got a long list of food tastes I am yet to acquire. But I'm getting there. Slowly, but steadily :)

I'm waiting to acquire the taste for brussels sprouts. I've heard from at least two different people that they're good when they're done properly. But what is properly??

mkihc: odd to remember a time when I didn´t like honey, but there you go. Bad cucumber trauma!
lydia: I´m glad to have seen the error of my ways, lemon and chocolatewise
andreaa: I started liking cucumber in tzaziki too
xps: thanks
rosa: I took a long time to come round to cabbage, too. I hope the cocarrois help
cindy: salmon and cucumber were meant to be.
beatriz_ thanks for commenting, I´ll be looking out for your post
marce: totally with you about combos, some things just can´t be otherwise.
Pille: aren´t we all!
Naomi: yep, I´m still not keen on those, I forgot. maybe one day we´ll like them, who knows?

Here I thought all these comments were going to be about this wonderful illustration, and not a single one mentioned it! I love to talk about food as much as the next person, but it was your charming accompanying artwork that really caught my attention on this post. I love it. It's definitely one of my favorites! : )