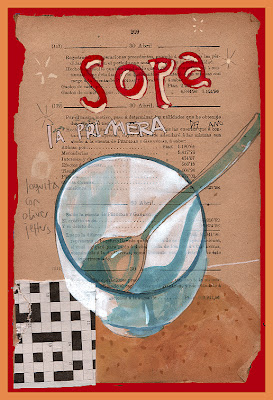 I made my first batch of proper wintry soup yesterday.
Monday isn´t a good market day, but I went in for some butter, and was inmediately sidetracked into buying carrots. And once there, why not go for the celery, cabbage and pumpkin? They´re not the sort of thing to suffer from being bought on a Monday.
And I happened to walk by the chicken stall, and there was a special on free range thighs. Now, I cannot resist a bargain, but I´m also a price snob, so I decided these legs were probably best used in a pot of stock.
So there I was, happy as anything, not minding at all that it was dark by six thirty. The windows on my kithen were steamed from all the chickeny vapours, and I was assured of a light and sustaining dinner.
And many more.
This soup started with onions, celery and carrot, simmered in olive oil. To which a potato was added, diced small, and some squashed, diced bigger. A handful of pre-soaked barley was tossed in, a bay leaf, Marigold bouillon powder, and a litre of water.
After half an hour, more water and some finely shredded cabbage, which simmered for fifteen minutes.
To serve, I nicked a bit of chicken from the stockpot, added a tiny shot of PX sherry, and it was a perfectly wonderful dinner, soft and unexciting but just what I wanted.
There´s a lot left, and it will have to be born again if I´m not to be bored. One option is a ladleful of the proper chicken stock. But the consomé is so good on its own that I tend to save it for just that.
So it´ll probably be some cheat´s stock and a bit of frozen spinach, with some lemon juice at the end.
Or a chunkier version, roast tomatoes from my freezer, with some chickpeas and pasta.
The list of variations is endless, but by then this batch will be finished, and another, different one, started, and so on, like this, until May, when soup season will be over, and gazpacho season starting over.
Posted by lobstersquad at 12:02 p. m.

I know just what you mean about the transition to winter soups. For some reason winter soup tends to be more forgiving -- any combination of things will work and will taste delicious, especially with a good stock behind it. And you will love your slow-roasted tomatoes in soup, I promise!

I also made a winter soup with the incredible aide of Thermomix: some onion, some leak, some carrots and some pumpkin ended up being a lovely silky cream. Croutons just gave it the gourmet touch!

i love winter soups and this looks lovely. as usual, the illustration is wonderful!

Love today's illustration. I can just picture you sitting down to a bowl of soup and working on a crossword puzzle.