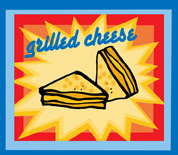 The article in yesterday´s New York Times was a lot of fun. It may have been that which made have grilled cheese sandwiches for dinner. Or maybe it was the sight of three small mishappen abandoned lumps of cheese in my fridge, and the knowledge that there was some seriously good bread nestling in the freezer.

Out came the panini grill. This is a gadget I try to use as little as possible, for obvious reasons. But every now and then, when it´s raining and you´ve had a long day, why not?

The beauty of these sandwiches is that bread and cheese are a blank canvas for anything you might think of. The versatility is infinite, as long as the contents of your fridge are.

Mine were not too good, but not too bad. I settled for the nearly defunct bottle of caramelized onion chutney, dolloped on the sliced cheese. Once the sandwiches were out, I prised them open, burning my fingers, of course (as the article says, sweetest pain) and put in a layer of thinly sliced plum tomato.

That way I had crispy bread, gooey cheese, a sweet-sour kick from the chutney, and freshness and zing from the tomato. I don´t butter cheese sandwiches. It´s enough for me to see them oozing fat from the cheese when they come out of the grill, thankyouverymuch.
Posted by lobstersquad at 8:59 a. m.

A good grilled cheese sandwich is one of my favorite things. A few days ago I traveled with a friend to visit a store that specializes in used cookbooks (you would love it....), and after two hours of shopping for cookbooks, we were starving. We stopped for lunch at a small pub, and had old-fashioned grilled cheese sandwiches. They were just perfect as we looked over our purchases from the cookbook store!

Grilled cheese sandwiches give me such pleasure! My favorites are with tomato (like you have here) or with mango jam (with gruyere cheese...oohlalagood!) :)

I always butter my grilled cheese sandwiches. It's simply not enough to see them oozing the fat from the cheese!!!

No butter on your grilled cheese sandwiches? You are a Paragon of Discipline. I gotta have the butter.

I came across your blog by chance and it was a lucky chance. Your drawings and collages are absolutely enchanting! Thank you for the visual feast.

how tasty! i love my grilled cheese sandwiches with tomato soup...

guru: ya que horror, yo debería
lydia: I love that, you made me very jealous
xps: sorry
joey: I don´t know mango jam, but I love it with mango chutney
tammy: that sounds great too
sandi: absolutely
casey: you have me thinking maybe I use very greasy cheese?
hannka: thanks so much, it´s great to have you visiting, glad you like it.
christinanne: me too, I have to start making some asap.

Grilled cheese are my total comfort food. My favorite is aged fontina with sauteed mushrooms. Yum!