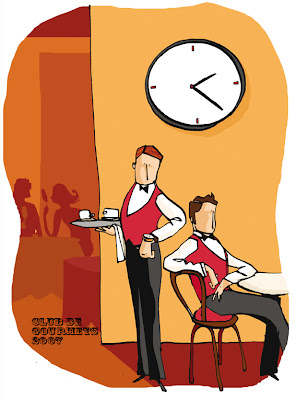 I think beef stew, or any other meat stew, is one of the pillars on which one can build their cooking life. I would even put in the list of the basics everyone should know how to make, with tomato sauce, brownies, vinaigrette , biscuits and roast chicken.
If I don´t, it´s because it´s a lot more hassle than it looks, and if the result is going to be very homely, then I don´t want to spend a lot of time on it. Low effort, high impact is my motto.
The problem, for me, is the browning. That instruction, "brown, in batches, until all the pieces are dark", always sends my heart plummeting to my feet. Oh, sure, I know it´s important, I know, it adds colour and depth of flavour to the final dish, and we all want colour and depth of flavour in a stew, do we not? Sure.
But, but. Browning a kilo of meat takes at the very least half an hour. And it´s half an hour spent battling meat that spits, fat that sputters, flour that burns, and a deep prevalent smell of beef that, however appetizing to begin with, permeates every stitch of your clothes, wherever they may be in the house.
This is not cool. This means that I only make my deeply flavoured and highly coloured stew once a year, and that´s not a lot of flavour, divided by 365, not really.
So, last week I tried it without browning it first, and at the end of fifteen minutes of relaxed prep time and three hours simmering in a low oven, what did I get? A dark, robust, hearty and very deeply flavoured stew. Plenty of colour, because all the liquid was red wine, plenty of flavour, because the beef was excellent Guadarrama grass-fed.
From now on, this is the way I ´ll go, because I love stew, and J adores it. You can´t call something that takes three hours in the oven to come to a jellified quiver quick, or that´s better for being left lying around for a day or two. But if you think that the active time is very very short, I think you might. And if you´re nervous about your reputation, call it a daube. But frankly, once you´ve tasted it, I doubt you´ll give a damn.

Assemble all your ingredients on your work top, and preheat the oven to 150ºC.
Heat up a heavy Le Creuset type cast iron casserole, or something that can later go in the oven. Cover the bottom with a generous layer of olive oil.
While it heats up, chop an onion, finely but without finesse. It will mostly dissappear. Chuck it in the oil, give it a swirl, leave it to sweat.
Wash two sticks of celery, take out some of the long strands, and chop it finely. Add it to the onion.
Peel two fat carrots and slice them into pinky-sized batons (you could make rounds, but I hate carrot rounds, myself).
Smash a clove of garlic, add it.
Give everything a stir with a wooden spoon, and check out if the onion is beginning to be translucent. When it is, add a heaping spoonful of flour and stir until it´s dissappeared.
Now add your meat (1 kg of stewing beef), and move it around until it´s gone from angry ruby red to ugly browny grey. This is a moment where doubt will assail you, but go on, trust me.
Once that´s done, you´re ready to add your liquids. As long as they´re dark, you´re in business. Guinness is good, as is red wine, and if you change the aromatics at the beginning, you can make a good mix with Shaoxing wine and soy sauce and a bit of stock. Tomato paste has a lot of fans, as do anchovies. Go whichever way you like, as long as you´ve got enough to cover the meat. I like to bung in a stock cube and a bay leaf.
Now cover the pot with foil loosely, and press is lightly in the middle so it makes an inverted dome. Cover the pot. This means that all the steam rises and falls back on your stew, rather than escaping the pot.

Put it in the oven, leave it for three hours. It will be even better the day after.
Posted by lobstersquad at 8:54 p. m.

It sounds good to me!

Whenever I make a stew or sauce with red wine, I throw in a large dollop of Dijon mustard, too. Like tomato paste, it seems to punctuate the flavor.

That's very timely, dear Lobstersquad. I've asked my parents to come over for lunch tomorrow, and my dad agreed only on the condition I make something very meaty :)
I like Lydia's idea of throwing some mustrad in, too..

It sounds like a damn good, both fragrant and 'clothes-friendly' beef stew!!! Great!!

I love these long-brasied stews...but yes, the browning does take time, spatters my stove top area, and (you are so spot-on on this) makes all my clothes smell! This is a great alternative! Thanks for sharing :)