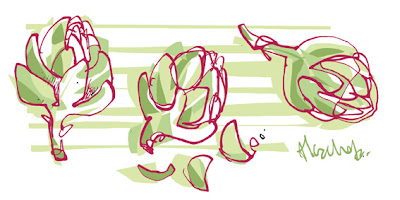 So, my organic vegetable box arrived on Tuesday, promptly at 8:30 am, just in time to slice a tomato for breakfast pa amb tomaquet.
A tomato, you say? I was surprised, too, but this is Spain, after all; the seasons tend to become fuzzy, especially in a droughty sunny year like this.
The contents were:
6 big tomatoes on their stems
a generous handful of cherry tomatoes
a non-curly head of frisee. I think I might swap this with my mother, and get her garlic shoots instead
tiny pickling onions
a head of broccoli
7 artichokes
four oranges, four pears, six bananas, and the courtesy parsley and bay leaves.

If I have one quibble it´s the plastic everything came wrapped in. If the stuff arrives in a neat little box, why do they need a plastic bag for each offering? Surely the box is enough, except maybe for the garlic shoots, which could have made everything smell, and which were, in fact, unwrapped anyway.

We used the garlic shoots in a risotto on Tuesday evening, with mushrooms (not in the box). Wednesday seemed perfect for steaming the broccoli and serving it alongside some rice noodles with minced pork and a nice and kicking garlic black bean sauce. Today for lunch we´ve had the cherry tomatoes in a salad, the artichokes with vinaigrette, and a fruit salad with a mix of the stuff in the box plus some kiwis I had.

The veredict so far? Very positive. I only signed up for this because they promised very fresh stuff. I don´t mind pesticides so much, really, but the idea of a piece of fruit being picked while very green and then languishing in storage for weeks seems plain daft. The rest, all the sustainability and ecology and good health are all very well in their way, I guess, but mostly a bobo concern that I´ll indulge as long as it doesn´t incomode me in any way. It´s the taste that matters. Yesterday´s broccoli may have been more chock-full of nutrients than others, but what leapt to the mind straight away was the fact that is was tender and almost buttery, and so flavourful that I didn´t add salt (though there was plenty of soy in the noodles, so that may have played a part).

So anyway, here´s my favourite way with artichokes. Rather than coring them ruthlessly and reducing them to just the tender little hearts, I like to strip them of just the very obvious hard outer leaves, and the tops. Boiled briefly, they are then allowed to cool for a little while, before being handed out, with little dipping bowls of vinaigrette. You tear out two or three leaves, dip the bottom, bite it, and toss the hard tops into a pile of debris on the side. In a few moves, you´ll be at the heart, and that you can dip whole and munch happily in its entirety.
I wouldn´t recommend it for a first date, but it makes for a more fun way of eating artichokes, and they don´t go so fast, after all that boring prep work.
Posted by lobstersquad at 5:16 p. m.

When I was dating and brought someone home to dinner with my parents, my mother would invariably serve artichokes with drawn butter or hollandaise. If they could eat an artichoke perfectly, she liked them.
There were a couple of guys that just didn't even try!

Wow! That's a pretty spectacular vegetable box. I don't think I've ever heard of anyone getting artichokes in their CSA box. Or oranges or bananas.

I love picking at an artichoke one leaf at a time. You can turn one artichoke into an entire meal -- especially if you're getting messy and eating with someone you love!

Mary: that´s brilliant! very savvy, I´ll put that into practice if need be.
Julie: well, I guess it´s not as local as it could be, and they cheat a little, because bananas and tomatoes in febuary are not really the thing, but everything has been so good so far, I´m not complaining.
Lydia: absolutely. the prawns of the vegetable world!
Xps: nos van a salir las vitaminas por las orejas.
Inés: todavía no he probado los tomates grandes. desayuné los cherry. te contaré, pero no creo que sean muy estelares, por muy ecológicos que sean, estamos en febrero! yo normalente hasta mayo ni me acerco a los tomates.

That's my favorite way with artichokes too, except I prefer lemon-scented butter to the vinagrette. And, I disagree, I think it's a wonderful first date dinner! What's more fun than eating with your hands? And if your date can't handle it, well, he's probably not going to be handle many other things either ;-)

I've heard that it IS the nutrients that make vegetables taste more delicious. ! I've also noticed that the organic farm veggies last much longer, either in or out of the fridge, which is a very happy bonus.

Dear Ximena, there is a meme going around, and I've taken such a liberty as to have TAGGED you. If you have time and wish, it'd be delightful if you participated! Thanks!

I just recieved my first box this week and I loved it!!

I am biased about the plastic bags. The truth is if something is kinda dirty (like potatoes or spinach) it will taint the rest. Or if something tends to get mushy it will probably also teint the rest :) Specially when it's all tight up in a box!! (at least @ my experience from other ecologic boxes).