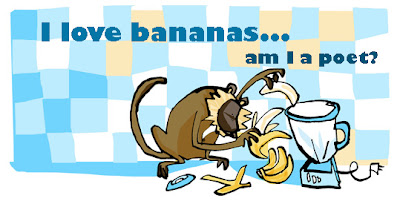 This drawing is one I´ve used already, but I can´t help using it again. For one, I really like it, and for another, it appeared on this blog almost two years ago, back in the days when only I and my mother read it. The quote is more or less from Wendy Cope´s The uncertainty of the poet.

The thing is, I can´t be serious enough about banana bread to do a special illustration for it. I just can´t. Even though I love it, I dont´think of it as proper food, but as something that belongs in the "cooking for kids" section.
It may be the name. There´s something so wholesome about it, it sounds as the sort of thing you´d have after a tofu burger. And the fact that the first instruction is to mash bananas, well, I ask you. Is that a worthy pursuit for anyone over four?

The only reason I cooked it the first time was that J loves it and says it´s his favourit cake(mind you, I haven´t seen him refuse a slice of any other). He must have picked up the taste in some summer camp stint abroad, because here in Spain we don´t do banana cakes much.

My recipe is adapted from Nigella´s How to be a domestic goddess. I´ve substituted most of the butter for a pot of yogurt, and left out a couple of spoonfuls of suger, because, well, since it´s not a serious cake, it shouldn´t have serious calories. But anyone wanting the uncut real McCoy can head over to Pille´s blog and check out the full glory version.

For all my apparent lack of enthusiasm, let me tell you that I make this cake a lot, and that it´s really great. It´s fragrant and dense and full of flavour, it keeps very well for a day or two (as if!) and freezes very nicely, making it a perfect breakfast, lunchbox or picnic sweet.

The most important thing is to start with really ripe bananas. Really. The barest minimum is a banana with little brown spots, but if you can hold your nerve until your bananas look deader than dead, so much the better. If you can smell banana every time you walk into your kitchen, they´re probably ready.

70 g sultanas
Rum or brandy, for soaking them
175 g plain flour
2 tsp baking powder
1/2 tsp baking soda
1/2 tsp salt
50 g unsalted butter, melted (this may seem silly, but it makes a difference)
1/2 cup (125 ml.) yogurt
120 g sugar
2 large eggs
3 very ripe bananas (about 300 g peeled weight)
60 g walnuts, coarsely chopped
1 tsp vanilla extract ( I often forget this and it doesn´t seem to matter)
Put the sultanas and rum in a small bowl and soak for about an hour (again, if you forget and just bung them in, it´s ok) . Combine the flour, baking powder, baking soda and salt in a medium-sized bowl. In a large bowl, mix the melted butter and sugar and beat until blended. Beat in the eggs one at a time, then the mashed bananas. My method for this is to mix it all with a potato masher, eggs and all. Maybe it won´t rise so puffily, but who cares? Stir in the walnuts, sultanas (liquour too, if you like, Pille´s tip, and very brilliant, too) and vanilla extract. Add the flour mixture, a third at a time. You will have a wobbly looking uneven mixture that will smell really good already. I line my loaf pan with baking parchment, because it´s a pretty moist cake. Bake in the middle of a pre-heated 180ºC oven for about 50 mins/ 1 hour, and do the toothpick thing.
Leave to cool on a rack and try to hang around the kitchen for a while. It will seem that all the bananas in the world have vaporized and are having a convention in your house.
Posted by lobstersquad at 12:58 p. m.

I love the substitution of yogurt here -- and I just happen to have a few of those bananas that I can smell every time I walk into the kitchen. Time to make banana bread!

It's a great cake indeed:) And isn't it dearing how our men cannot refuse a slice of cake? Ever..

Like poetry in motion. I love the yogurt as well, nice and moist. Yum.

In all the banana breads we've had, (a lot!) I never thought to sub yogurt. Great idea! We also use the obvious chppd walnuts instead of raisens, too.

And my contribution to this conversation is: try it sliced a half inch thick and well-toasted with sweet butter.

Hi lobersquad many times I don't heard from you. Really lovely recipe, I love bananas too!!!xxxGloria

Banana bread has always been a favorite for me...both to bake and too eat :) I just made a batch of banana Nutella cupcakes (recipe from Delicious Days) this weekend (I'll post about it soon!) :) This one with the liquor and raisins sounds gooood!

I love banana bread, too. I have a good recipe, but I'm going to try yours now!

I saw your post on Orangette and stumbled over here and happy that I did so. Can't wait to try this recipe. I've used sour cream in banana cake before, but I bet yogurt would give an even better tang.

Lydia: works a treat, and is so guilt-free!
Pille: we wouldn´t have them any other way, absolutely.
Cakespy: love that song.
Elarael: will try next time I make some, this one dissappeared too quickly.
Gloria: long time no see, thanks!
Xps: y los gritos de "guarros"!
Joey: banana and nutella! I have to make that
A forkful of spaghetti: I hope yo ulike it
Michelle: welcome, and thanks. Sour cream is almost impossible to find in Spain, or I would try it, it sounds great.

i love banana bread - yet another variation on a great, great recipe. thanks!