Tomatoes in my quirky oven 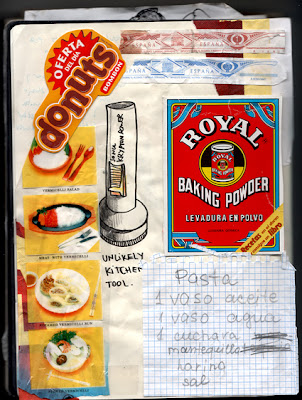 Well, not really. I mean, I´m not one of the select few who can make strawberry mirror cake at the drop of a hat. That is blog aristocracy, and they have my deepest respect (and a nice logo?!?)
I just mean that baking in my kitchen is an act of daring. It requires a lot of nerve to pull a cake off chez moi, and I say this with modest pride.
My oven is a museum piece, gas fired, and only heats from below, or from above, but not both. It has no temperature settings, merely an on and an off position. By some very delicate twiddling with the knob, I achieve what I like to think of as a medium oven, but which, actually, is anybody´s guess.
Since the heat is fierce from below, I never put things on a baking sheet, but rather in a pan suspended on two pieces of pottery equipment that make the heat slower to burn the bottom of cakes and biscuits.
I never really know what´s going on in there, and so usually spend the baking time hovering anxiously around, beaming it with a flashlight every now and then.
Did I mention, it has no light inside? I mean, really, you must agree, that´s pretty daring.
This summer I had occasion to potter around what may be the dream kitchen. In it, Pille had an oven thermometer. Even though her oven comes equipped with all the buttons, she still wanted to make sure of the temperatures, so there it was. She also told me her theory: "Everything bakes at 200ºC".
So I bought one and when I tried it, I realized how stunning my baking feats actually are. The oven is totally bonkers. It takes very long to heat up, and rarely, if ever, goes hotter than 200º. Once there, however, it never goes below until turned off.
So, actually, I´ve spent all my baking life proving Pille´s theory without knowing it. Makes everything so much easier. Not that I ever make complicated stuff, of course.
These tomatoes are something easy that cooks away all by itself, and is always handy to have around. They freeze well and are good with everything. When I bloged about them before , there was some imprecision in my explanation and method, which I´ll now try to redress. There are still good cheap tomatoes in the markets, go make the most of them!

Cut plum tomatoes in half and put them cut side up on a roasting tray. You won´t be able to get so many in, but they´ll cook more evenly and easily, so it´s worth it. Drizzle with olive oil, sprinkle with herbs, salt and sugar, and put in a 200ºc oven for at least an hour. After that, they´re probably usable, but I like to leave them another hour in what I used to beleive was a slower setting but now know is also 200ºC.
Turn the oven off and leave them inside to cool. By then the skins will peel off easily, which is recommended before storing. You´ll be glad you did it.
If the toms were very juicy, make the world´s best possible tomato juice with lemon and worcestershire sauce.
(The colage is a page of my kitchen sketchbook. Notice the flahslight).
Posted by lobstersquad at 9:36 a. m.

Oh noo - now everybody knows my dirty little secret! But it is true that 90% of things I cook in the oven are there at 200C with a few exceptions like meringues etc. And it works;)

Ah, a woman after my own heart -- a quirky oven, lots of plum tomatoes cooking for hours (I cook mine for 8-10 hours at lower temperature). Sounds like you have truly figured out your oven!

You know? I completely understand you. I have the same oven, gas, no light and every time I bake something, it's like a lottery!

Oh my, you have no idea how much I can relate to this! I´m a Daring Baker myself both literally and figuratively and my oven is exactly the same as yours (even though I think it has a decent minimum temperature (however hard to get to without turning off the oven.)
Just yesterday I made 3 batches of chocolate oatmeal cookies and almost burned all of them while my American friend laughed at the situation because she couldn´t understand what was going on with the oven.
I´m not that attached to my oven yet, so I´m sure I´ll love having a more reliable one the day I move.

I've been wanting to make oven roasted tomatoes for a long time. Now that you've mentioned that I can make a bloody mary with the leftover juice, I no longer have any excuses!

I do a similar oven roast of tomatoes, but it's the page from your kitchen notebook that I love most about this post. Absolutely delightful.

My oven might be related to yours. Although my oven does have numbers on the dial, since buying an oven thermometer I've realized that these numbers don't have all that much to do with what goes on in the oven. On my oven, moving the dial the tiniest bit --just a hair in one direction of the other -- sends the temperature up or down 150 degrees. Sometimes. Sometimes it doesn't make any difference at all.

Saffron captured it well -- baking in my oven is also like the lottery. No telling which way it will go.