Too many cookbooks and a chocolate mousse 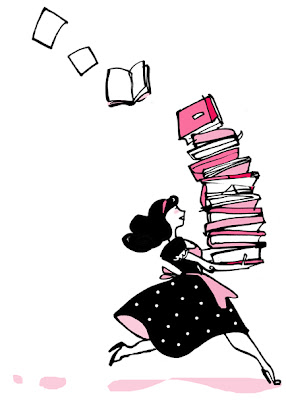 My cookbook habit has lately spiralled out of control. I´m unrestrained enough as it is when it comes to normal books, but with those at least there´s a reason. You read them from cover to cover, and that´s it. You don´t say "Here´s Kavalier and Klay, marvelous novel, try page 457, you´ll love it".
But how can you ever finish a cookbook? I firmly beleive that with four or five you could cook until the end of your days, but I have more than seventy. And still, I crave the smell of fresh ink every now and then. Preferably now.
I just love them. They´re ideal dip-into literature, relaxing and exciting at the same time, absorbing but allowing one to drift off in a reverie. The chattier sort, like Nigella´s, or the ones full of fascinating snippets of history and customs, like Claudia Roden´s, I actually read like novels. And even though they pile up all over my flat, I go on buying and ordering more, as if I didn´t have dozens of recipes for roast chicken already, because there´s always something you´ll end up using.
I often wonder, what makes a book worth your while? A high percentage of recipes you might use? Two or three you love? One that´s so good that you´ve actually memorized?
My copy of How to Eat is falling apart, and there are only two or three recipes that I´d never ever make from there. It was the first big cookbook I bought when I moved out of my parents´ house, and has shaped my whole kitchen outlook. Definitely wort it.
Then again, though I haven´t cooked a single recipe from it, Jake Tilson´s Twelve kitchens has altered my whole graphics-in-the-kitchen deportment - worth every penny.

When it comes to cooking, I don´t even have that much mentioned problem of having so many recipes to try out I only do each once. I´m actually pretty faithful to the tried and tested favourites, and if I love something once, it´s instantly enshrined as my official version. So that I mostly cook from my old books, somehow, which makes the habit more absurd. O well. It could be worse, I guess.

For another incurable addiction, here´s a recipe for chocolate mousse from the first cookbook I ever bought, aged fifteen; Chocolate, by Jill Norman.
I have never even tried any other. Why would I?, this is flawless. No butter, no oil, no sugar except the one in the chocolate make it dark and intense, just how I like it; worth the cover price, and more.

Chocolate Mousse
125 gr. darkest chocolate
4 eggs, sepparated
Melt the chocolate . I like to give it a minute in a medium microwave, and when some is melted and some is not, stir it so the rest melts. That way it´s cool quickly, and we go to step two, mix it with the yolks.
Now beat the whites til stiff ( I add a pinch of non-regulation sugar here, it makes them set better).
Fold into the chocolate carefully, without knocking air out. Pour into glasses or ramekins and chill for 12 hours.
Posted by lobstersquad at 7:47 p. m.

Me too. Huge piles, everywhere in the house. But I love all of them.

The Jake Tilson is great - changed my perception of where the visuals can go as well.

There is no such thing as too many cookbooks -- at least, I hope there isn't, as I have more than 400 of them!

lucy. jake tilson is really something, isn´t he? very cool
lydia: you make me feel so much better. I´m off shopping now.

Jake Tilson's book has been on my wishlist for awhile -- don't remember where I first heard about him (your blog maybe?)-- and based on your post and Lucy's comment I've just gone ahead and ordered it.

I also read cookbooks like novels and have them piled by my bedside table (among other places). All the things you list are things that make a cookbook worth my while, and I'd add one more: inspiration.

I am much the same--I have way too many to ever use, but they are so beautiful lining the shelves of my kitchen. I use Deborah Madison's books religiously, but most of the rest of the collection is an assortment of ethnic books. What you said about Claudia Roden was so familiar. Arabesque was a work of art. I love books like that that really illuminate the cuisine and culture of a place. Penelope Casas is another favorite.

I'm sure you know this already, but your blog is featured in the article below on MSN's home page!!!! How exciting!!!

Congrats on the MSN mention! And I won't even try to pretend that I don't have a cookbook buying problem, as you've seen my books yourself. However, I think Lydia still has more than I do (not that I've counted, of course), so I'm feeling a bit better..

You have summed up the cook's desire to buy cookbooks so perfectly! My cookbook are among my most prized possessions and sometimes, after a long day, just flipping through one will make everything so much better!

I've got a cookbook obsession too. I'm trying to have some form of restraint because it makes me want to quite my job and just stay home and read them. I bring one in to work everyday so I can read it during my lunch break!

hi all: I´m very glad to see that we´re all pretty much as crazily addicted. makes me feel so much better

The cookbook obsession we all seem to share! I have no idea sometimes why I could ever want another cookbook but some how out of nowhere comes that overwhelming urge and one more is added except it's usually more than just one. You have certainly done it justice here!

lol. did you know that chocolate was banned in switzerland for many years. read this