Slow roast pork for a crowd

I used to be very scared of my oven. It seemed to me that roasting things belonged to a higher order of cooking than the one I did. Making a curry sauce for a chicken seemed so much less daunting than locking it away in a baking hot box.
The day I found out that this is not so, but far otherwise, was a very happy one for me. An epiphany. Stout Cortez was innexpresively blasé in comparison.
Which is why one of my favourite things to serve up when I have a crowd coming is a slow roast hunk of pork. The thing has to stay in the oven for at least four hours, but half an hour up or down makes no difference. It´s better with 24 hours of previous marinating, but it´s also impressively delicious without. The marinade, or the rub, can be anything you like, and so the dish can be taken in any geographical direction. And there´s something festive in a big meaty centerpiece, a soupçon of the fatted calf old-style hospitality.
It is excellent cold, and so can be left on a table for people to carve as they will, and stuff into sandwiches, or eat with potato salad, or some quickly put together beans in vinaigrette. And rice, too, of-course. (Get a rice cooker inmediately!!!!)
As long as you don´t break the cardinal rule taught to me by my mother: have twice as much booze as you think you´ll need, and under pain of death don´t run out of ice, this makes for easy-peasy entertaining. And you won´t have to worry about smoke, or cleaning the grill.

The cut I use is aguja, which I think is pork shoulder, but just to be clear, I´ll make a nice little diagram of where in the pig it is. 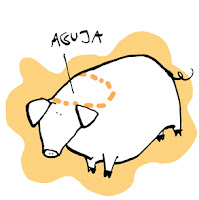 It´s a cut that is pretty much self-basting, and to my mind, much more juicy and flavourful than any other. It doesn´t dry out, and it costs a fraction of the price of loin, or the little tenderloins. It´s also tear-inducingly good the next day, in sandwiches, tacos, noodles, or empanadas. So it would be very silly of you not to cook as big a piece as you can find.
My butcher usually has a joint weighing about 3 kilos, bone in. This is tastier, but more tricky to carve, so by all means have him cut it out, but don´t forget to put it in the roasting tin.
In Spain they never leave the skin on the meat, so there is no chance of crackling. But I suspect after so long, the skin would be quite tough, so I´m not sure that I´d leave it in if I could.
When not making a Chinese version, or a USA style barbecue sauce, this is my favourite. I think I took it from a NYT article about taco fillings:

Quantities can vary, I think you really have to use your eyes and make it to your liking. Blitz it in a processor, put it in a freezer bag, and leave as long as you can, 24 hours max. Then strain it. You will be left with a paste in the strainer, which you will rub on the meat. The liquid, an oily and spicy orange juice, you will use to baste the piece every now and then, as and if you remember to.

Make little cuts in the meat and slide in slivers of garlic.

Then put it in the hottest oven you can for half an hour. After, turn it down very low, and leave it for four hours at least. It can stay longer, and won´t dry out, as long as we´re talking about a seriously low oven, 110ºC or so. Mine has no switches, so I don´t know exactly what goes on in there, except that it smells heavenly. Once done, you´re left with a deep brown, crusty outside, and a tender, juicy white inside.
Make sure you´re doing the carving, and can snaffle as many bits of charred outside as you can, all the while looking bountiful as you hand out every third slice.
Posted by lobstersquad at 6:39 p. m.

that sounds amazing! i love the little pig illustration.

That little pig is so cute I just want to eat him up! Oh wait, I'll even eat ugly pigs, especially their shoulders! It's too bad, but suddenly pork shoulders are incredibly trendy in NYC and have therefore become stupidly expensive. sigh, trends!
but thanks for the ideas, they're wonderful!

this is interesting. we always slow-cook pork, but we do it the other way round. start with a very low temperature (i start at 120C for a roast that will be in the oven for 5 hours, 150 for 3 etc) then gradually increase it.
The secret to perfect crackling (because there is no roast without it where i come from) is to have the roasting dish covered initially (i use a lecreuset casserole dish with a lid or a clay roemertopf) and only lift that lid in the last hour, when cooking temperature is raised to 200C. if it's still soggy, i sometimes give it a little help with my blow-torch (but don't tell anybody!)

Superb! My husband is a huge fan of pork as most Germans are – I’ll try this! And by the way, your mom is definitely right about the booze and ice. Party on...

Yum! I am sorry to hear from ann (above) that pork shoulder is trendy in New York. Right now, it is my own little bargain secret (along with a bunch of astute, old-fashioned ladies of various ethnicities) in Pittsburgh. Not for long, I guess.

I love this cut, and recently learned that it can be sort of deconstructed, cleverly. You kind of cut carefully along the lines of the fat and other white stuff, slowly opening it out until it is more or less flat. Then you can put all your seasonings in the pockets formed, and roll it back up, tie it, and roast it.Mmm.

rachel: poor little pig
isa: qué fuelte qué fuelte
xps: ni te lo imaginas,
le blog: lo del hola es total,
ann: trendy? let´s hope nobody catches on here!
passionate cook: that trick sounds great, I´ll try it next time, even though I don´t have crackling
jennifer: the ice thing is so hard to get across sometimes, glad you agree
guru: yoy bet!
lindy: that sounds very good, I´ll talk to my butcher about it, I don´t think my knife skills are that good. thanks!