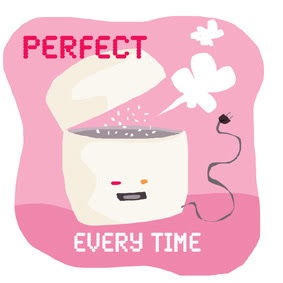 I have been the proud and happy propietor of a rice cooker for a week now. Even though there hasn´t been a peep about rice on the blog, beleive me, there has been plenty of rice in the kitchen. J is beginning to complain. Even though he comes back for second and third bowls every time, I´ve noticed.
I´ve tried several types of rice. Long grain and short grain, which I make with the 1r=1&1/3w. I wash the short grain well, the long grain just-so.
After making them plain to begin with, and trying them fried once they were cold, I started to branch out.
There was a Hoppin´ John/Congrí-esque thing on Saturday, made with drained tinned black beans and ham in coca-cola stock, to go with the roast pork. Rave reviews.
Sunday was the day of saffron rice.
Tuesday was the classic Spanish combo, plain white rice with pisto and a fried egg, chez maman. I´ve made my mother buy a rice cooker too. She´s very happy with it so far. Dinner at home was Singapore chicken rice, with Thai jasmine, using 1r=1w. Lipsmacking to the utmost degree.
Wednesday I had friends coming over for a working lunch, so I went with a tried and tested fave from days before the wondertool. Steamed salmon rice, as seen here, but sauteeing the mushrooms first.
Thursday I tried brown basmati, 1r=2w. Once cooled, it went in a salad with mint, parsley, diced deseeded cucumber, olive oil, mirin and soy sauce, a Nigella inspired combo that I loved. Light yet filling.
You´ll see that I haven´t moved from the far east, but I´m thinking of coming west by easy stages, with biryanis and pilafs. Ending, who knows, in our very own near-eastern rice, the paella that fills me with such dread?
Posted by lobstersquad at 1:54 p. m.

What fun!!! Soon you'll be using your rice cooker for things other than rice -- it makes a great steamer, too. (PS -- love the ilustration. Your rice cooker looks so happy!)

I don't think I could justify the counter space with a rice cooker but your illustration is so cute! I can just see it turned into a Japanese character that lives on stationary and glassware and says "engrish" things like "our friendship is like much rice that swells so big and is so fluffy with happiness"! I love it.

Making paella in your rice cooker? My son who works in a restaurant says that they make it regularly in the rice cooker and apparently it works, although it must be an abomination to the "purists". The lowly rice cooker seems to be the kitchen swiss knife.

Who knew?
I have lead a sheltered life and always just boil the water and add the rice.
There is a whole world out there!

Great inspiration :-) I need to branch out and try other rices!

jerry: so much so! it´s embarrassing
lydia: will try steaming soon, I think
kickpleat: I love that!I was going for a japanese little plastic cute creature look, you got me totally
jose: I´m just wondering if it´s possible, no more. it probably isn´t
sandi: whole world, absolutely
xps: atrevete, que no es pa tanto
nikkipolani:other rices are great. not sure that I want to make stews or things like that, though

that is quite some fun you are having with the rice cooker. I definitely want to try Singapore chicken rice.

So nice to see you enjoying your rice cooker! Makes me see mine with new eyes :) Almost every household here (Filipinas) has one...but most of the time the only thing that comes out of it is plain white rice! Your experiments are inspiring! :) I'll be coming back for more :)

I love my rice cooker, too.

Is the arroz with fried egg and pisto a variation of arroz cubano? I got introduced to that...only with some fried garlic cooked in with the rice! Delicious! Glad you love your rice cooker!

veron: singapore chicken rice is marvelous in it. flawless
joey: I hope soon every household here has one. it´s great!
Tammy: I made it with the stock I had from making ham in coca-cola. 1 and 1/3 stock to 1 of rice, plus some drained canned black beans. There are no black eyes peas in tins here. It came out very good, slightly sweet and tanned
su-lin: it´s very much like arroz a la cubana. we serve it with fried bananas, the sweet kind. but cubans swear that´s nothing like what they eat

I have a wonderful, beautiful, amazing rice cooker. Have I ever used it? No! I am so scared of it. Probably because I want it to work so badly that I am afraid I will be disappointed. Can you give me any tips, or point me in a direction so that I feel more confident even opening the lid?

anonymous: you won´t regret it, I promise. just follow the proportion 1rice to 1&1/3 water for short or long grain normal rice (not basmati, or jasmine), and you´ll be amazed. I´m still in totall awe of the machine

Love my rice cooker and used to make rice in it almost daily when I cooked Japanese for a year or so. The Japanese rinse the rice by filling a bowl of water with the rice, strain, repeat - 100 times! None of this 'rinse it in a strainer' business. Then it drains very very well. Then it is added to water again! What a job. But delicious...