Sausages in a balsamic glaze

My so-flattering mention yesterday in Elise´s Simply Recipes blog spotlight had me in a whirl. I almost expected to have to start signing autographs. It´s also provided the push I needed to organize the blog a little. It´s still not very tidy, but at least now you can see on your right a little list of the recipe labels. Clicking on them will at least get you straight to the recipe posts. I hadn´t realised I´d done so many posts that were just plain and simple jabbering.
And now for the real stuff.
A few months ago I wrote with some indignation on the subject of balsamic vinegar . 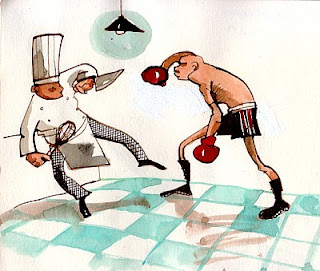 It´s still something that can make me go off on one. I still foam at the mouth when confronted with plates that have been dribbled on with some vague idea of being artistic or dashing, or of marking up the price of some ensaladilla rusa.However,
I´ve since been given a recipe that has changed the status of the bottle of balsamic in my cupboard. From dusty embarrassement it has gone straight to the must-haves.
My aunt Begoña gave me this recipe, and if I didn´t love her already, just for this she´d have my undying devotion. It falls under the category of high impact-low effort cooking, and is just so so good.

It takes just two ingredients, fresh butcher´s sausages, and some balsamic vinegar. The basic elemental stuff that´s mostly caramel and who-knows-wat-else.
First, boil the whole sausages briskly for ten or twelve minutes, until they´re cooked trough. They´ll emerge pale and quite gosh-awful looking. This is ok, never fear.(they can be made ahead up to this point, yet another bonus of this marvelous dish)
Take non-stick frying pan that will fit the sausages snugly, and tip some balsamic into it, enough to just cover the bottom. Put your sausages in over a medium heat. The vinegar will start to bubble and reduce, coating the sausages in a sticky glaze. When one side is brown, turn them over.
In a couple of minutes, you´ll have a panful of sausages that will be a dark, glossy brown. They will be sweet and savoury, but the acid of the vinegar will have evaporated. As the sausages are cooked already, all they do is take on the colour and the flavour as the vinegar reduces. It´s very quick.
You´ll be spared the grease, the smokey fug, and the uncertainty of wether the insides are really cooked under the burnt exterior. There is no burnt exterior here, just some fingerlicking marvelous jammy outside.
They can be served with some rice (duh) or salad, but they´re so good, it´s hard to keep them from being eaten on the way to the table. 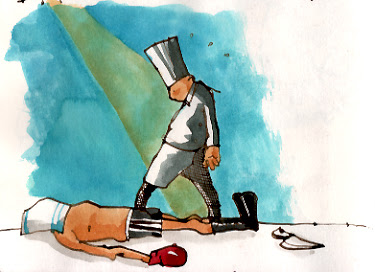 So, ok, I don´t take back what I said about balsamic glaze as doodled on plates, but I´ll admit that as an actual glaze, and as a sweet-sour complement to something that usually benefits from that treatment, pork, it most definitely has its points.
Posted by lobstersquad at 8:00 p. m.

I need to go read your balsamic post. I have started at them for countless minutes, asking myself do I want aged or what about this or where is Medona. However, your Aunt's recipe does sound like something that you will just eat before it hits the table, with only a knife.

This is an excellent method for sausages...I love them but I don't know how to be creative with them....sounds heavenly with the balsamic!

Never made sausages this way before, but it sure does sound tasty and easy. Need to go and buy that bottle of balsamic after all..

These sound heavenly, sausages are now on the list for the weekend. We use balsamic in stews and casseroles a lot. Just a teaspoon adds depth. We never drizzle!

Yum, I will try this. My I bet my hubby, a sucker for sweet and sausage would love it. I recently made grilled mango with balsamic, recommended to me by the bar tender’s at my favorite dive!

A girlfriend of mine brought something like this to one of our supper clubs - she sliced the sausages (once cooked) into rounds and then popped them into the balsamic and then topped each round with yummy goat cheese! Made a great snack!

Perfect! I will give this a try. I have some sausages left in the freezer... their time is up!

This sounds very good - I'm definitely going to try this as soon as I get some good pork sausages!

We just had those sausages in a balsamic glaze for dinner, alongside some leftover ratatouille. Absolutely delicious, and very, very sticky indeed :)