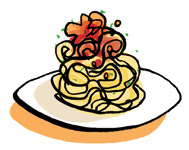 Summer. It kind of gets to you, in the end, doesn´t it? You may try to bumble along happily, pretending it´s not here, but before you know it, it will get you in the neck, nastily.
Forgive the hiatus, but really, these temperatures have made anything other than opening the fridge an utopia. Likewise, the computer keys smoke. However, since I´ll be in Estonia by Friday, I´ve taken heart.
Here´s a recipe very suited to summer. Pasta alla bottarga is one of those winners, pasta recipes that can be made while the pasta boils.
Even if it´s just pasta, it can´t fail to be impressive. Bottarga, the dried roe of red tuna, is so exotic, so thorougly mediterranean chic, and so expensive and hard to find, that you have an instant high-impact-low-effort classic on your hands.
I suggest that you attempt this only in case of having recently come into an inheritance, or if some kind friend has recently been to Cádiz and has picked up some of the stuff.
Once home, a piece no bigger than a zippo lighter is enough to feed four, so it´s not so bad.
You just need to peel and grate that piece into a bowl. Cover it with about a half cup of the best olive oil. Chop a bunch of parsely, crush a couple of dried chillies, and add them, together with some grated pepper. Salt need not apply, yet. Leave it to infuse for a little while, half an hour or so.
Then boil your pasta ( I think 500 gr. for 4, but you be the judge). Flat shapes optional, long non-negotiable, and don´t even think about parmesan. When al dente, toss into the bowl, mix well, and check for salt and oil. It may not look like much sauce, but the bottarga is so strong that the little pieces of oily roe clinging to the pasta will be more than enough. A little green salad after this goes down a treat. And if you happen to have any leftovers, it´s also great cold.
Posted by lobstersquad at 7:10 p. m.

HI, just found your site via a few links - delicious days namely - wanted to say your site is lovely. Enjoy Estonia, I used to vacation there as a child - it's a lovely place!

I absolutely love bottarga on pasta. Will try this when I want to splurge in the kitchen.

Hi can you help me I am trying to find the spanish word for the fish GURNARD or RED GURNARD. Is there any way you can find out for me?
Thanks Jackie

Hi jackiep: I´ve never seen that fish in my life, but I´ll ask my father, he´s the fisherman of the family, if there´s a spanish name, he´ll know.

Thanks. It's a tasty fish, quite bony though. I've seen it displayed in spanish restaurants but never managed to get the name. I hope your father knows of it. Jackiep