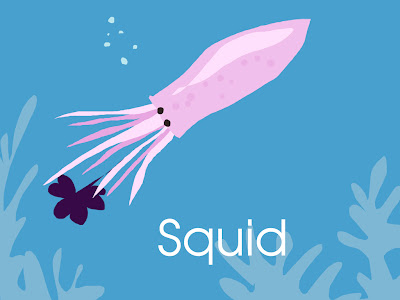 I´ve read many times the rule about squid: cook it fast for a minute, or slow for an hour, unless you want to eat rubber rings.
I usually go for the slow, since it seems easier to control; you let the thing simmer and can try and see if it´s ok. The flash method seemed a bit scary.

However, once you try it you see it really is the easiest thing, and so good. We had a couple of small squid and a bunch of samphire, a salty, crunchy seaweed, with very cold beer before dinner and it was just the thing.

Squid, as much as you like but at least one per person
salt, pepper, parsley, lemon juice, olive oil

Marinade the cleaned squid with the salt, pepper, parsley, juice and oil.

Heat a non-stick pan as high as you can and when it´s hot throw the squid on it. It will curl and contract quickly. The second it´s opaque, take it out. It´s almost impossible to undercook.
Your kitchen probably won´t have the power to turn it crunchy golden like the planchas of tapas bars, but it´s still going to be very good. If you´re doing a lot then do it in batches, so you can control the thing.
Posted by lobstersquad at 2:46 p. m.

Yo las hago así únicamente - too lazy! If you make some diamond shaped slits on the chipirón, it doesn't curl up so much.
I do salt, pepper (or chilli flakes), parsley, crushed garlic and add both chipirón and a handful of prawns. Dunked on top of black spaghetti, its a full and delicious meal.
Sigh. Pity I've moved and don't have a fresh market next to me anymore.
Sang