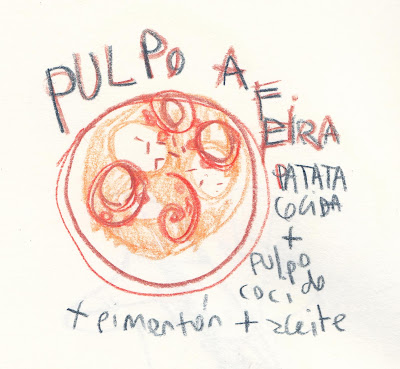 I´ve written about pulpo a feira before, and octopus salad. Always, I began with the instruction "buy some boiled octopus".
But then I moved to the northernmost reaches of civilization, to a place where octopii are rare, and when found, small and raw. If you´re lucky, they will be clean. If you´re not, you´re in for an interesting ten minutes gouging yucky stuff from the insides of the head. You´ll never believe how much stuff can fit in there.
So anyway, here are instructions for boiling an octopus. Once it´s done, you only have to proceed to the other recipes.

It´s very easy, as long as you follow two rules:

I have only done this with the small octopii (?) I find here in the North Sea, but in Spain you´d bring home a great whaking beast, so it´s best to make this for a party.

First, freeze the octopus. Ask the fishmonger if it has been frozen before, and if it has then you´re free to go. Freezing breaks up the whatever technical term it is so that it is tender.

Put it in the fridge to defrost overnight (or, you know, waive all health and safety advice and leave it on the counter for a shorter while. it´s what I do)

Bring a big pan of water to the boil (no need to salt). Add a bay leaf and a a few peppercorns.

When it´s boiling, drive a hook through the octopus´s head and plunge it into the boiling water. Count to three, and take it out.

Wait for the water to come back to the boil and repeat the process three times.

This ensures that the skin won´t break up and it will look prettier.

Put it back in the water, cover and leave to simmer for about 90 minutes, by which time it should be tender.

Or, if you are using a pressure cooker, leave for 30 minutes and let the pressure come down on its own.

I thought I owned every conceivable piece of kitchen gadgetry and now I find out I need a HOOK! Ha ha ha

María: gracias, gracias, el punto celta siempre llama!
Deb: oh, Deb, don´t break my heart. You know you just have to stroll down to the market to buy some boiled pulpo, no hooks...sob. I miss my market.