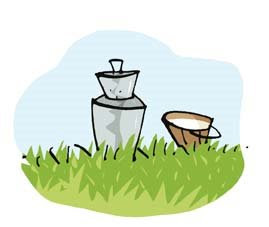 It is well known that I am very lazy and refuse to cook croquetas or tortilla, am more than glad to buy roast chickens, would not dream of making my own jam and feel faint at the mere thought of cleaning anchovies for boquerones en vinagre. So severe is the case that I won´t go near most recipes that call for sepparating eggs or browning meat. I don´t fry, I don´t roll and I don´t stuff, and am constantly plugged to my freezer, Thermomix and rice cooker.

So you see that when I say that making yogurt is well worth your while, it´s true, and not the kind of annoying off-the-cuff remark of someone who can take apart a car and put it back together. The basic elemental yogurt you buy costs ten times more than what you´ll make and tastes nowhere nearly as good. And if you buy good milk, even organic, the economics of the thing really start to make sense. And it´s so so easy.

Back when Abba were still together, my mother owned a yogurt making machine, and I´d always assumed that it was necessary for making yogurt, as a waffle iron is for making waffles. But like so many of my late seventies beliefs, this isn´t true. All you need is milk and yogurt and a bowl and time and a blanket. 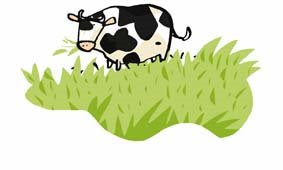 To further convince you of my laziness I won´t even bother to type the recipe, but instead direct you here. Though I´ll warn you that Heidi makes it sound much more complicated than it is (really, you just boil some milk, wait for it to cool down a bit, mix in yogurt, leave it to set somewhere warm). Just one piece of important advice given by my friend Cristina, dairy expert of Malasaña: to retain the heat the best thing is to put the yogurt bowl inside one of those insulated coolers one takes to the beach. Much better than blankets or shawls, whatever Ms Roden or Ms Colwin may say.

Make your yogurt int he evening in five minutes, shut it inside the cooler and awake next morning to thick, creamy, sweet tasting yogurt you got for pennies.

You will officially be nominated my new hero, should the above be true... And I plan to put it to the test once I have finally transformed the rhubarb stalks living in my kitchen (that have been, well... "stalking" me, since I bought them at the market on Saturday) into a crumble or summat...
Hang on, rhubarb compote on home-made yogurt... It has to be a winner. Hooray!!

My mum had one of those machines too! A plastic aberration containing brown (of course!!) glass cups with orange-ish (of course!!) screw-on plastic lids. Oh, how I love 70's take on style...not!

Lovely drawings, as usual.. I love Greek yogurt, but it's only found in one shop here and costs a fortune. Every now and then I treat myself to a tub of Fage Total, eat all but 2 tbsp and make a fresh batch myself :)

Mireille Guiliano also has a good recipe for yogurtmakerless yogurt:

Homemade Yogurt Without a Yogurt Maker

1. Warm up the milk in a saucepan over medium-low heat until bubbles appear around the edge and steam rises from the surface.

3. Put the starter in a small bowl, add some of the heated milk, and stir until well blended. Return the mixture to the large bowl, a third at a time, making sure to stir and blend well after each addition. End with a final stir, making sure all is well blended. Cover with a heavy towel and keep in a warm place 6 to 8 hours or overnight (a gas oven with a pilot light is fine, or placing a saucepan of hot water in the oven to raise the temperature will help if your home is not warm enough).

4. When set, cover the bowl with plastic wrap and refrigerate for 8 hours before serving. If thicker yogurt is desired, empty chilled yogurt in a muslin bag or cheese-cloth, suspend over a bowl, and drain.

Bravo! You have indeed made it sound really simple...must try this! :) I love yogurt and would love to try my hand at home made :)

Just wanted to know if you would be open to selling advertising on your blog to related food stores. If yes, please get in touch with me as I would be interested in buying an ad. I could not find an email address on your blog which is why I am commenting here. Please feel free to delete this comment. Thank you!

La Ninja: well, so far it´s worked pretty well. The beach cooler thing seems to be the perfect tool.
Pille. oh but Estonian yogurt is so good, you dont´have to bother!
Alice: thanks, that should make it very clear to everyone.
Inés: no puedo meter otro cacharro, por eso me gusta lo de usar uno que ya hay, la neverita. pero me da bastante envidia tu plan.
Jo: well there you go, it´s really very easy.
Stan: hi there. I have no ads on my blog. It´s mostly a lazy thing, you see, because it´s just a tiny hobby of mine and if I take advertising then I´ll feel that I have to justify it and not go for weeks without posting or things like that. Also, I like to keep this little window clutter free.
But thank you!

Hey, you have a great blog here! I'm definitely going to bookmark you!
ccent

do not forget to add hot water inside the cooler!

ooh, i've always wanted to make homemade yogurt. you have encouraged me to finally try it!