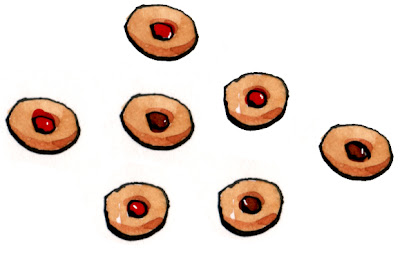 Do you remember that thing of getting a lot of presents on your birthday, opening them up exitedly, and then going off to play with your old toys?
I had a relapse on Tuesday.
I´d ordered a few books from Powell´s. Quite a few, cookbooks, mostly. I did bung in some on cinema, art history and linocutting, but it was mostly as a sop to my conscience. The rest was wall to wall indulgence.
So they arrived, and I walked to Cibeles, and picked up the parcel, and had great fun browsing the books, and bookmarking some recipes, and generally behaving like I should.
But what I did when the time came to actually cook was to try a new recipe form an old book. Classic.
I happened to open How to be a domestic goddess, and my eye caught this recipe that I hadn´t noticed before, something waggishly referred to as Peanut Butter and Jelly Jewels.
Now it so happeneed that I had a jar of pb in the fridge that looked like staying there forever. The satay it was meant for never materialized, the noodles I dressed with it were an unmitigated disaster, and I didn´t want to spend the rest of the summer licking pb off my finger.
I also had the rest of the ingredients, except the jam, and I was waiting for some people to give the go ahead to some drawings. Time and peanut butter on my hands. Why wait?
And boy o boy. As it says in one of the new books I´d just bought: how many recipes does one really need? I say, how many books? I could probably spend a happy and greedy life just cooking from Nigella´s first two. In fact, I probably will, and just read the rest for relaxation.
In my inexpert hands, the cookies merely came out crunchy outside, crumbly and chewy inside, densely packed with flavour, yet light in texture. But in the hands of a Jenjen or Deb, I can´t imagine. Doubtless angels would fly down and snatch them away, before the earth actually became heaven. I kid you not, these are some seriously scrumptious baked goods, and they´re very easy to make, too.
Nigella describes them as the sort of jewels a fairytale princess wears. Don´t be fooled. Nigella has these crazy little moments, and I forgive her because I love her, but they look nothing at all like jewels. They look like what they are, which is

Cream the butter and the sugars. When light and fluffy, add the eggs, one at a time, then the vanilla. Add the flour and baking powder and salt, mix, and put in the fridge for half an hour.
(In Thermomix speak this is 5´v4 with the sugars and butter. Butter must be softened, and you can start with the butterfly. If not, start with the blades, and then the butterfly. Then through the funnel add the eggs. The flour shouldn´t be mixed at more than 2, don´t overbeat)
Preheat the oven to 180ºC
Make balls of dough about the size of a walnut. You´ll get abour fifty. Flatten them slightly, and make a hole with your finger, quite deep, or it will dissappear as the cookies rise in the oven.
In fifteen minutes they´re done, and this is in my weird oven, that only heats from beneath. They should be golden at the bottom, don´t worry if they look undone, they´ll harden as they cool.
Inmediately after they´re out, put a splodge of jam in the hollows, or if, like me, you´re not a big fan, a piece of dark chocolate.
This is a big batch, but they keep very well in a tin for a couple of days, and freeze perfectly.
Posted by lobstersquad at 1:07 p. m.

Nigella is THE goddess of cooking. I totally looooooooove all her books!!

Love your drawing of the cookies -- they look so happy!

I want to be a domestic goddess~ any other hints for us.
The fun sketch of the cookies caught my attention!

I live just seven blocks away from Powell's Books for Cooks and Gardeners in Portland...it's where I buy my Deborah Madison cookbooks.

Thanks for the recipe--sounds great! I love Nigella too. I have another of her books, but still need the one you just reminded me about.

Peanut butter and jam, of course! What a classic combination. Thanks for the post; I made these this week and they were very yummy!

These look great! Does anyone know about how many teaspoons, Tablespoons or cups is a 100 grams of sugar, butter, peanut butter, etc? I would love to make them but I'm not sure of the conversions....
Thanks!

Elisabeth: I got this recipe from an English book, so it didn´t have American measures, which usually drive me nuts. Donnahay.com has a good conversions part.