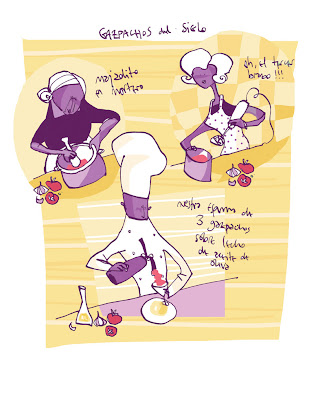 Chapter three. This is where it begins to get a little wearisome. You can feel the audience begin to shuffle its feet a little. We´ve heard all that we could ever want to hear about gazpacho, no?
Time, then, to introduce new characters in an effort to make the narrative a little snappier. Cue: garnishes.
For everyone who likes to drink their gazpacho, wether straight from the jug in front of the open fridge (guilty as charged) or from a double-handled consommé cup at the table, there is someone who likes chunks in their food. Without bite, they say, there is nothing. And that´s ok, too. This is a very accomodating dish.
So what you do is serve the gazpacho in a tureen, flanked by a host of little bowls that hold the tropezones. The basic tropezones are cucumber, green pepper, onion, sometimes tomato, diced. Fried bread and chopped hard boiled egg are a usual. Because, like, where would we be without something fried or without eggs in a dish, man?
If you´re in a restaurant, things begin to get a little fancy. They like to add a certain little something that justifies the 4€ mark up. What they like to see as added value and you may see as a sprig of parsley and a drizzle of balsamic glaze.
Or maybe you´ll get something really elevating, like shaved ham, the tropezón du jour. Or shrimp, or clams.
Another popular theme is the different colour cream, sitting in a pretty blob in the middle of the plate.
So, justu trick your dish of gazpacho out, and eat it with a spoon, and depending on your desire for chunkiness . Easy.

Now for variations. Once you have been having gazpacho for many generations, and the thing seems to be a part of your bloodstream, you may want to change the script a little.
A very trendy change is to substitute avocados for the tomatoes. Why they call it gazpacho beats me. Still, if you like your chilled soups pale green and rather bland, go ahead and be my guest.
Another up and coming version is what we could call Mediterranean borscht. To your gazpacho you add boiled beetroot little by little, and turn the colour scheme up, as much as you dare, from the fuchsia to the deep burgundy.
With this I really think you have to add a splash of yogurt in the middle of the bowl, and chives.
José likes to mix ajoblanco and gazpacho, but there I think we veer from the versions and just stray into strange doings.
Piquillo peppers give a good smoky kick, as do roast tomatoes. I´m not a stickler, you know. You can add whatever you like, as long as you know where you´re veering off course, and tell it in the name. As in "smoky roast tomato gazpacho", rather than just "gazpacho".
After all, the thing is made with tomatoes and peppers and cucumber, and there´s not many things that really don´t go with that. Cheese croutons, or pesto, or tapenade, or those little fancy pate choux croutons all combine marvelously with it.
Just one thing. Whatever you do to it, make sure you cover it well before it goes into the fridge. There´s nothing worse than a fridge with uncovered gazacho in it. It pervades everything, goes everywhere, and really, you don´t want your beer and your butter to taste of anything but themselves.

Next week, after I come back from yet another wedding in the south, I´ll post a final entry with tips, and my mother´s recipe, which is quite something, and quite different.
The illustration appeared in the Club de Gourmets special restaurant issue of two years ago. It´s meant to convey the evolution of gazpacho, from the old mortar and pestle days to the syphon and agar-agar of today.
Posted by lobstersquad at 11:46 a. m.

I love the illustration, and that you give us permission to make gazpacho any way we wish! I'm also a "drink it straight from the fridge" person, but when I do manage to serve it in a bowl, I like to add some oven-roasted shrimp on the top.

Funny, I have a recipe for a raw (livefood) soup that I am making this weekend and it is, basically, a smooth gazpacho. A few extra's for health and flavor like miso and fresh ground sesame seeds, but otherwise very much a gazpacho. Instead of the cayenne I would love to add a piquillo pepper. I wonder if you'd send me a seed or two?

Very curious about your mother's recipe, now! Thanks for a lovely site!

sour cream and crab meat!
I like mine chunky, cold or room temp.
yummy!

I am greatly enjoying the gazpacho series, and plan to print it and save it in my recipes notebook. I await the next installment raptly.

Yummy! You've inspired me to make gazpacho this week. Tomatoes are really good here in Texas right now. I can't wait to make some.

Hello, the tomatoes are ripe in Nice and I can't wait to make your gazpacho (or gaspacho as the French say). So happy to have found your blog thanks to Stephanie in Melbourne!