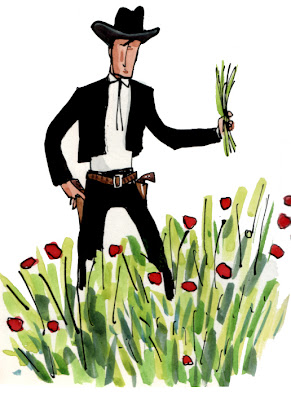 This will be Asparagus, take three, and before you groan, let me tell you, these are different from the rest, trigueros, the wild asparagus.
Not that I have any here, since they´re not easy to come by. The beauty of trigueros is to pick them yourself, and for that you need to be in the country. They´re spring´s answer to mushroom hunting, and the reason why, come March, you see people walking slowly in the countryside, peering at all the bushes and tall grasses that grow in roadside ditches. They´ll be clutching what looks like a very straggly bouquet, but will really be a bunch of espárragos trigueros.
Down South you´ll find enterprising gentlemen selling fat bunches of them (and big bags of snails, too) in petrol stations, or outside road bars. But they lack the thrill of the chase. Plus, they´re expensive.
They´re not easy to spot, so you´ll probably find yourself with just a few, and if they are to go around, you must resort to the time honoured Spanish custom : a revuelto. That is, scrambled eggs, popular for dinner any time, and also as a ración to share in a tapas bar. Of course in tapas bars, and mostly everywhere else, they just call thin green asparagus "trigueros", but don´t be fooled. Trigueros are wild, and they are bitter and different from the garden variety. Just so you know.

If you want to do the revuelto, here´s how. We´ll go with the classic, revuelto de trigueros, ajetes y gambas, or asparagus, young garlic and shrimp.

Heat some oil in a skillet (plenty, since we´re dealing with Spanish bar cuisine, and that´s always oily). Throw in your asparagus and young garlic and fry them slowly, with the lid on, til they´re tender. Then add your shrimp, and the second they look like they´re half done, add the beaten egg. Proceed as for scrambled eggs.
Serve with fried (of course) bread.

You can use normal green asparagus instead of wild and normal garlic instead of the young shoots. And I won´t shudder if you use them straight from the jar. Just make sure they´re bottled in Spain, not in China or Perú. The shrimp will of course be frozen, and I really entreat you to use toast instead of picatostes, so I won´t have your digestion on my conscience.
Posted by lobstersquad at 7:09 p. m.

That sounds delicious! My sweetie is allergic to eggs, so I'll have to wait for a night on my own to make it. But very quick and tasty.

I love eggs, shrimp and asparagus. But these wild asparagus sound absolutely wonderful! I wonder if we have something comparable here in the US. It is still not quite asparagus season in Rhode Island; another few weeks and we'll be going to our local farm to buy the spears that are fresh picked every morning. I cannot wait!!

Love trigueros, one of the few products that are still seasonal.

I like to cook them a la plancha or in stews, esparragados or with juicy rices. Yummmm

This sounds amazing - especially the wild asparagus part. Not sure I've ever seen anything like that here!

I know we have wild asparagus here in the states, there was a book title that made reference to it back in the 70s I believe, 'Stalking The Wild Asparagus.' They probably sell it at the Greenmarkets here in the city, but I bet those silly, early-rising, chefy types buy them all before us mere mortals are even rubbing the sleep out of our eyes!

I've never heard of this wild asparagus, so after reading this entry I went off to do a bit of research...apparently they CAN be found here in Australia, but are quite rare and super expensive :( *sigh* I guess I'll just have to imagine eating them from reading this post :)

asparagus, eggs, shrimp!
I have all these ingredients at the moment..heh...it's be a good recipe to try out:)

I love your blog, always so colourful, always so inspiring, most important of all, it whet's one appetite just reading it:)

He almost looks out of place...

I am having this for supper tomorrow. Suddenly, there is asparagus at my market for $1.19 per pound. I bought too much, fearing that they will take it away any minute!