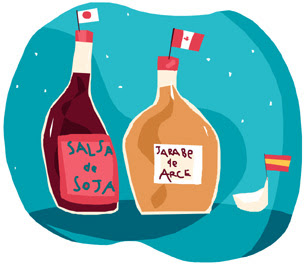 My bottles of Canadian maple syrup tended to last forever. I used it only in the very rare occurences of making pancakes. Now, however, the thing just dissappears as fast as I can buy it. Which isn´t all that easy, as it´s not the sort of condiment to make it to the shelves in my market. Still, I find it, because now that I´m the Pancake Queen of Apodaca, it just wouldn´t do to make do with anything else.

And if that weren´t enough, I´ve made a recent discovery, which I like to call sweet-salty Canadian salmon. Or just Kickpleat Salmon, after the owner of the blog where I read about it. The original recipe is for a noodle soup on which pieces of grilled salmon float like lordly pink icebergs.
But of course you can just use it any time you want grilled salmon, which, as far as I´m concerned, may well be any time. I like it with rice and steamed vegetables. I sometimes grill the vegetables, too. I think that paired with cold soba noodles it´s priceless. Also, if you´re careful to cook more than you think you´ll eat, and manage to not wolf it down at a sitting, you may have some leftover. In which case it´s the best thing in the world for filling rice paper pancakes, with cucumber and carrots and mint. Works pretty well inside a flour tortilla with yogurt and cucumber, too. In fact, it just works pretty well everywhere, basically, so here´s the recipe:

Salmon: I like to ask for a tail piece, wheighing around 600 gr. I ask the fishmonger to take out the bones, sometimes the skin too.

Mix the marinade of maple syrup and soy sauce. I think you have to trust your judgement for the qantities, since the salmon pieces I get are never the same size. Just make enough to coat the fish, and remember this rule: double soy sauce to syrup. Add a couple of dashes of sesame oil, some hot sauce. Kickpleat says the juice of one lime, but I like a dash of vinegar and a splash of sherry. Maybe a squashed clove of garlic, if I´m in the mood, and ginger if there´s any in the fridge. Leave it in the fridge for 30 minutes at least, but it can be longer, to suit your convenience.

Now here´s my grilling method, developed carefully over time with the intention of avoiding the intensely fishy and sticky fug that grilling salmon in a pan can produce. I just hate making breakfast in a kitchen that smells of yesterday´s salmon. Ugh.
So listen: turn on the grill/broiler in your oven. Let it heat up for a few minutes. Put a pan that can go under the grill on the normal fire and let that heat up. Meanwhile, take the salmon out of the marinade and pat it dry on the skin side. When the pan´s hot, put the fish in, skin side down, and put it quickly under the broiler.
In about five minutes, depending on the thickness of your salmon, you´ll have a beauty. Slightly charred on top, it will be juicy inside, as the skin will protect it from drying too much with the contact of the hot pan.
If you prefer, you can ask your fish guy to skin it, in which case you´ll have two browned sides. You´ll just have to be careful that it doesn´t cook too much, but even that´s ok, as salmon is a very forgiving fish, being so oily.

And of course this method works perfectly with any other marinade, or with plain salmon.
Posted by lobstersquad at 1:40 p. m.

"like lordly pink icebergs" what a priceless mental image! I love maple glazed pork, and maple glazed roasted vegetable, and I really, REALLY love a little golden drizzle of syrup on my grapefruit halves. The citrus brings out an incredible smokiness in the syrup.

Salmon braised in maple syrup, soy sauce and orange juice is a fixture in our house. I first made it for my Canadian husband, who likes maple syrup on/in anything, but I've come to love it, too. I serve it over a green salad, and use the sauce as salad dressing!

mmm, kickpleat salmon...i like the sound of that! glad you enjoyed the recipe!

Enjoying your blog - lovely illustrations. Try grilled salmon with maple syrup and dill. I will be sure to try your suggestion as it sounds delicious.

Bingo! I know what is for dinner tonight. Salmon that is sweet and salty. Yummy.

Thank you for a wonderful recipe. We all loved this, and it was so easy to make. I even boiled down the leftover marinade for a thick, delicious sauce.