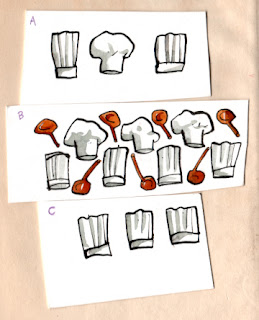 The past week has been kind of tough. The crayfish incident gave a chance to my sister for her directorial debut, but I, after Melissa´s comment, had to check under my bed for lurking monsters. Thanks, pal, I hadn´t done that since 1981.
And it only came last in a list of soul-searing experiences. There was the pâté de campagne on Wednesday, which turned out fine, but took its toll. Note to self : don´t grind meat on that otherwise wonderful machine, the Thermomix. Tuesday had me confront a cauliflower I´d overlooked and turn it into a soup that was clearly channeling glue.
One little accident after the other, so yesterday I refused to go into the kitchen. I wanted no truck with a room connected with snapping claws and rags of gristle embedded in rotor blades. J was put in charge of producing banh mi-ish sandwiches with the remains of the pàté.
After a fall, it´s back up on the horse quickly, though. Everybody knows that. So I looked about me for a recipe that wouldn´t try my nerves, with ingredients that wouldn´t freak me out, and, in fact, would fit a "many of my best friends are mosquitoes" mood.
Something important in these moments of post-traumatic disorder. I plumped for granola, for which I´d bought the ingredients and then enver done.
I know it sounds daft, making your own cereal, but, well, here are some reasons, apart from the general deliciousness of the thing:
1-Control. In every commercial granola there´s at least one product you´ll hate. I used to have to pick around the dried banana very carefully. Not any more.
2- Sweetness. Again, I find commercial brands rather too sweet.
3. Interior decoration. Ok, I´m not saying this a good reason, but it´s a reason. Granola looks stunning in a jar on your counter, and if you make your own, it can be customized. I´ve added dried cranberries to my mix, so that it matches the red kitchen wall.
4-Smugness. Ignoble feeling, yes, but who doesn´t like feeling like a competent housewife for once?
5- Aromatherapy. The house smells wonderful with the fumes, all nutty and spicy.
6- Of course I don´t like to point this out, but (whisper) health. Read out the label on a box of Jordan´s Country Crunch and think again.
7. It´s really, really easy to make.

All you do is toast oats and nuts in a low oven with some honey or syrup or both, and once it´s cool, add dried fruits. So it´s not so much a case of giving a recipe as of saying: choose your favourites.

My choice was 500g rolled oats, 1/4 white sesame,1/4 black sesame, 100g flaked almods,1/4 honey, 2 teaspoonfuls of golden syrup, 1/4 a cup brown sugar, a pinch of salt, and a dusting of cinammon.
Later I went with 100g dried cranberries and 100g chopped dried apricots.
I think next time I´ll probably skip the black sesame, which floats to the top and looks like bugs swimming in the milk.
Posted by lobstersquad at 12:46 p. m.

I like how you added cranberries to match your walls!

oh i think i'll this recipe... i have cranberries and nearly all the ingredients. i once made a nutella-esque granola, dusting cocoa and including hazelnuts in the mix. tasted nothing like nutella, but it was still delicious. alas it was good with ice cream so defeating the health bonus :D

i am just about to buy a thermomix, having had one on loan for the past 4 weeks... can't imagine life without it anymore!
what's the problem with grinding meat? i was rather hoping to give my beloved leberkaese a try...

hi Everyone
passionatecook: I think it must have been my fault, because nobody seems to have a problem with it. so good luck with the Th, it really is the best thing ever, I´d be lost without it!