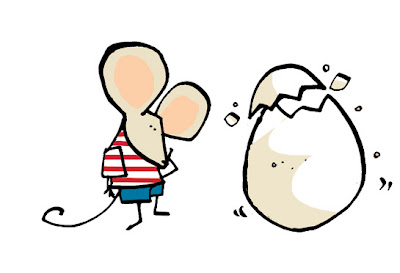 I used to think that breakfast stacks of pancakes, dribbling maple syrup down the sides, were things that only happen to Americans, like junior proms, or the right to bear arms.
Sure, there are plenty of recipes for the things, and I´ve even tried my hand at them now and then. But they seemed like a big deal. No matter that they always begin with some words about how easy it is, and how it takes less and no time, and how you can do them for a weekday breakfast. I always ended up a nervous wreck surrounded by bowls and scales and meassuring devices, with bits of flung about pancake in my hair. The things themselves would be unrecognizable in their shape, and either black or milky white.They still dissappeared fast into J´s mouth, but that´s nothing. The man will eat anything.

I decided they were a myth. From now on, I´d only have them when going seriously cold turkey, and it would be the Spanish way. Three big pancakes, with whipped cream and caramel, in the afternoon, at Vip´s.

Mark Bittman saved the day again. He did a column, and one of those videos, and I must say it looked easy. Very. Specially because there was precious little meassuring involved. Which is all to the good if it´s breakfast we´re talking about, when one is groggy and carefully tipping flour into a bowl until it reaches the 125 gr. mark can be a bit much.
I was still a bit sceptic, though. It couldn´t be as easy as it looked, surely? Well, beleive me, my European friends and neighbours, it was. Wonderful.
So, here´s the video. And the recipe, so easy that it can be memorized:

One cup of flour, one of milk, one egg, one teaspoon of baking powder, one tablespoon of sugar, one pinch of salt.
Mix it in a bowl ( maybe the milk and egg first in another, it´s no big deal), easy does it, with a whisk. No electric devices needed, they´ll only make the thing gluey later. In a few seconds the thing looks like a real batter, it´s magic. Then, here´s my favourite bit, cut a knob of butter and spear it with the point of a knife. Smear the pan with it, so it melts, and there´s perfection for you, a think film of butter on which you now pour the batter. Use a spoon or a small ladle to put it in the pan, where it will make neat little circles all by itself! And in a few seconds they´ll bubble up, and now is when you turn them. A little flip should be enough. In a couple of seconds the other side is done, and voilá.
Go on like this and in a few minutes, I promise, you have your very own stack, just like in the movies. And there won´t be a shoot-out in the diner.
You won´t have free refills of coffee, though, because that is a thing that really only happens to Americans.
Posted by lobstersquad at 10:58 a. m.

Oh, do not forget the very American maple syrup that you pour on top of the pancakes. It dribbles down the sides of the stack, and makes everything sweet and gooey. My Canadian husband thinks the syrup is the best part of pancakes!

We actually eat them a lot for dinner with just a bit of cinnamon added to the batter.

I just anted to thank you for the awesome job you have done on the logos for our baking group, Daring Bakers. I am amazed and very rpoud to display such talent on my blog. Thank you again!

I'm glad you've discovered pancakes as they're one of my absolute favourite foods! Try them with a little sprinkling of sugar and a squeeze of fresh lemon juice, that's one of my favourite ways to enjoy them ;)

Just popped over to say many thanks for the awesome job done on the Daring Bakers logo! It looks so wonderful and perfect for the blog!
Freya
p.s. Love the picture of the mouse accompanying this post too!

Americans just get free coffee because their regular coffee are awful. ; )
Tatu

American coffee is poured so liberally in an attempt to make up quality with quantity. It doesn't work.

Ximena, I feel the same way about pancakes. I often buy a box mix, because I can't even fathom measuring ANYTHING first thing in the morning. I know.. I'm a cheater. =)

But I'm honest.. so please believe me when I say - Thank you so very, very much for creating a custom logo for our Daring Bakers group! It's awesome! Truly. As Helene said, I am very proud and honored to have such beautiful artwork up on my site.. thank you again. =)

Favorite breakfast pancakes, for me: buckwheat pancakes with real maple syrup. Try them- guaranteed love. Can you get maple syrup? You must have it. If not, let me know and I will send you some. Really.

My favorite breakast-diner pancake place does have free refills of what we call "good-bad" coffee.
This is different from bad-bad coffee in 2 ways. It's strong and totally boiling hot. You'd never let coffee like this in your house, but it has a certain legitimacy in context. It's the "cup of java" from noir movies, and so on.

your recipe is so easy, I can't believe it! You make me feel guilty about having my pancakes for breakfast... but they were so good I couldn't wait until the afternoon to eat them.

xps: cuando quieras
lydia, lindy: it has to be maple syrup, I wouldn´t have them any other way! Thanks for the offer, Lindy.
Ramona: good idea, must try
helene, freya and paul, lis: the pleasure is all mine, I promise, it was a fun job
ellie: that´s how I have filloas, lemon and sugar, the best!
soniasan: gracias!
emi, tatu: I know, it´s bad coffee, but sometimes it´s not so bad, I quite like filter coffee.
rose: I´m completely ruined now, all I´ll ever do is make pancakes all the time...

hi ximena, just discovered our blog by way of my friend pille... love your style, have been thoroughly enjoying the posts i've read so far.
i only discovered pancakes (american style) a few years ago and although i don't make them often, i do enjoy them on some very indulging occasions. maple syrup, fresh fruit, the works. not if served before 12, though, a girl's got to sleep, right?