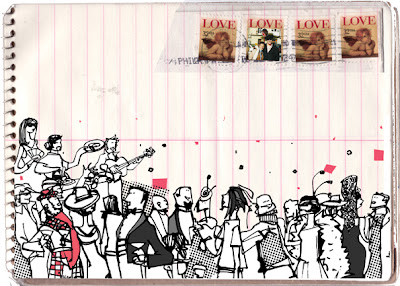 An engagement party in Spain is a very ceremonious thing. It´s actually called the asking for the hand party, which imparts a whole courtly love atmosphere of solemnity from the word go. Everybody sends flowers to the bride´s house, where the families of both parties meet, maybe for the first time. There´s an exchange of presents, given by the parents of the knot-splicers. Appropiate oohs and ahs are proffered by all and sundry as the groom flashes his new watch/cufflinks, and the bride extends her right hand to show off the rock. Corks are popped, healths are drunk, nosh is noshed. Everybody is quick to point out how good looking the other family is, and how perfectly marvelous the children of the new DNA merger are going to be. Singles are asked when they´ll find a mate, ungengaged couples when they´ll get married, the recently married when they´ll have a child, the proud parents of one when they´ll have another, and so on, until smiles are stretched thin and some hands itch to reach for the unopened champagne bottles and crack some heads. The usual.

This particular pedida was José´s sister´s, and we did the catering at home, with yours truly directing operations. I accepted in a moment of absentminded hubris, but at the risk of sounding conceited, I´ll say it´s pats on the back all around, for a mostly pretty good meal. There were some sticky moments, but a couple of aunts rallied round to help, one plying me with wine and the other directing the rice-heating opperations, and all was well.

I didn´t eat anything, which in me is ve-ry rare indeed and a true sign of my frazzled nerves. Until the puddings, which I hadn´t made, arrived, and I gratefully collapsed on a cushy chair, to eat strawberry pavlova and watch the eclipse. Terrifying ordeal. My hat off forever to proffessional caterers, and a word of advice to you young and feckless things : stick to the pros.

I´ll now give the recipe for one of the more popular canapés of the evening, adapted from Jamie´s Dinners.

Split the casings of some butcher´s sausages. Add plenty of pepper, some salt, chopped apple, chopped parsley, grated lemon zest, and some of that fried onion that comes in packets ( or chop and sautee it yourself). I suspect sage would work a treat here, as would orange zest. Play with it.

Roll puff pastry very thin, dusting with flour as needed, and cut long strips that are about 6 or 7 cm wide. Fill with stuffing, close the long roll, seal by pressing with the tines of a fork, and then slice into whatever size you like. For this party we made them bite sized. Brush with beaten egg.

Bake at 220ºC until they´re puffed up, deep gold outside, pinkish inside. They reheat reasonably well, but what you´re aiming for is to eat them as soon as is bearable, straight out of the oven. You might dispense with the guests, actually, and have a round dozen of them yourselves. They´re too good to share.

Quantities are rather vague, but it´s not so bad. If you have too much stuffing, fry it up, add the egg left over from washing the rolls, and eat it on toast. If too much pastry, cut in strips, egg wash it and dust it with cheese or sesame.
Posted by lobstersquad at 9:08 p. m.

ahahha, very nice! Well, from the read of it, it seems though that you did an amazing job! A tough one that profession, isn't it?

that sounds so fun! glad to hear that the need to crack heads after being asked when you're going to get married is universal.
It makes me grind my teeth ever so much

What a lovely gift, to give someone the gift of your cooking for their "asking for the hand" party!

You could have been describing a typical pedida de mano or despedida de soltera here, which is not surprising since most of the local customs are adaptations of Spanish ones. :) It sounds like you orchestrated a wonderful party and those canapes sound wonderful!