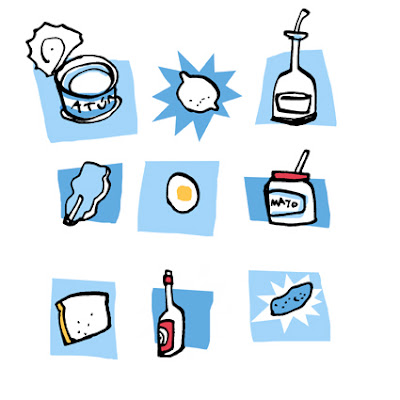 It´s Lent, it´s Friday, it has to be fish. I could enthuse over the baked mackerel we had on Wednesday. Or talk about my favourite salmon rice. But not today. I have a poltergeist cold that refuses both to go away and to manifest itself clearly. I have deadlines. I want something simple and comforting, and even the thought of defrosting some chicken stock seems like a challenge, so I´ll go with that old friend, the tuna sandwich. And before anything else, please let´s agree to not give the holy name of tuna sandwich to those pale foamy wet flabby sacrilegious things that lurk in chill-cabinets.

Recipes for sandwiches aren´t really recipes, but only lists of quirks and fads and phobias masquerading under the name. There´s a lot of sandwich hectoring, plenty of huffy condemnation of certain ingredients, and always rules. Everyone has them, and they can be as weird as my father´s firmly held belief that pork and mustard don´t go together.
The only answer to this is a Rule to end all rules : Do it yourself. It´s the only way to avoid nasty jolts like finding mayonaise and cheese nestling under the same slice of bread, which I, for instance, hate, and my sister Gadea loves.

My version, which is, naturally, the best in the world and the one and only one for me is as follows:

Wholemeal loaf bread, crusts off.
One small can of tuna in olive oil.
Mayonaise from a jar, tricked out with a drizzle of olive oil and a good squirt of lemon juice.
Several drops of tabasco.
A couple of gherkins, the sweet and sour Polish or German kind, chopped very small.
A whole lettuce leaf, cut to the size of the bread, but not chopped or sliced.
I am not averse to some boiled egg going in, but I think it has to be the sort of forlorn boiled egg that comes back uneaten from a picnic. If you have to start boiling eggs the simplicity of procedure is broken and the whole experience ruined.

Serve with potato chips, preferably salt and vinegar, and either ice-cold beer or ice-cold Diet Coke. I think the bubbles complement it nicely. Must try it with Champagne sometime.
Posted by lobstersquad at 12:09 p. m.

Hooray for tuna sandwiches with mayonnaise (or Miracle Whip, for those of us who have confessed to that particular culinary quirk)! Yes to tabasco and potato chips, too.

Oh yes, olive oil and Tabasco are key! I hope you feel better. Now I'm going to make myself a tuna sandwich!

Mmmm, nothing like a good tuna sandwich - I like the tabasco addition! (And I love your illustrations.)

I admit I will boil an egg just for a tuna sandwich. I hope you feel better soon.