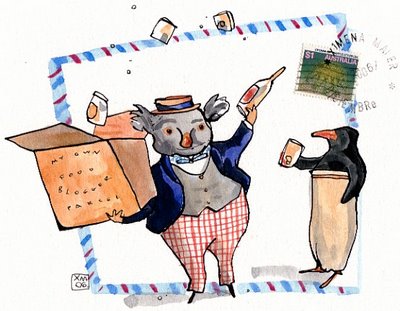 Do you know The Magic Pudding, that treasure of a children´s book? It´s an Australian classic, and one of my most ever favourite books. It lives on the shelf beside my bed.
That´s where I keep a stash of books I love more than the others. So that if I can´t go to sleep , or wake up in a frazzled state of mind, or have the flu, I just have to reach out to feel jes´ fine.

So anyway, this magic pudding is the sweetest book you´ll ever read, about a set of carachters with names like Bunyip Bluegum, and Watkin Wombat. Don´t you want to read it already? And when you know that it´s about a Magic Pudding that´s a pie, except when it´s something else, like a steak, or a jam donut, or an apple dumpling, or whatever its owner wants it to be? And it never runs out? See, I can tell you´re amazoning the thing like crazy already.

All this is by way of introducing what I like to thing as My Magic Pudding Moment. Last week I received a parcel from Australia, from Neil of Food for thought . We´d done a little transaction you may know about soon, concerning some changes to Neil´s blog, and this was my material reward.

My very own food blogger parcel, and a magic pudding of sorts. For a few days now we´ve been dipping into it and drawing out something wonderful and different each time.

First to fall, spectacularly, torn apart by various overexcited family members, where a chocolate Torcik wafer cake, and Sliwki, chocolate coated prunes (a lot of the stuff is Polish, courtesy of Neil´s wife). Then there were the oh-so-moreish tins of Watrobki Tybne, cod liver in oil (absolutely, one just isn´t enough). There are a bunch on instant soups and sauces that I haven´t tried yet, and some lovely blueberry jam. A packet of Australian spices, and some wattle seed, which I´m finding very fascinating. The bottle of Tokay I haven´t opened yet, even though there were strong suggestions that we all toast Australians in general and all Neil´s family in particular. I´m saving that for a special moment, and for now we´ll stick to the various flavours of tea, also in the parcel.
The beautiful tea towel with Mae Gibbs illustrations has pride of place in the kitchen , and I´ve been studying Bill´s kitchen closely. It´s a great book, and I can tell it´s going to jump straight into the list of favourites.

There´s also Tasmanian honey, which I requested after reading Jenjen´s post , and some Red gum honey, which Neil prefers. I´ve tried both, on toast with butter, two mornings in a row, and can´t make up my mind.

Unlike the Magic Pudding, it will run out, eventually, but still, it´s quite magical, in its way, the whole blog thing.
Thanks so so much, Neil, and I´m really lookign forward to your revamped blog.
Posted by lobstersquad at 8:57 a. m.

thank you for the chocolate coated prunes. maravillosas!

The Magic Pudding sounds charming and the package sounds like Christmas in October.

Magic Pudding parcel, that is so appropriate. Glad you liked everything, I wasn't too sure when I popped in the cod's liver! Now I'm as nervous as a kitten in a lost dog's home, waiting for my new blog skin to arrive.

How exciting, I love getting surprises in the mail. And an Aussie package...even better.

The wattleseed is great, have you gone and smelt it yet? I love the smell, alomst like ground coffee. And yes, you can definitely put it in custard and you don't even have to strain it if you want to see the little bits of wattleseed. You can also put in into breads if you want.

It sounds fantastic: the book (my favourite was "The Owl Who Was Afraid of the Dark"), the parcel ... I love power blogs and internet!!! hip, hip! Hurrah!