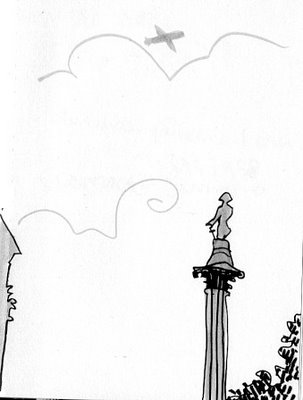 I go to the UK quite a lot. More than to any other foreign country, and plenty more than to many places in Spain. So I think I know it pretty well. But of course I don´t.
This time round, I decided to go to places I´d never seen before. It meant that I couldn´t see  my favourite picture in the whole world, or watch the street hockey in Kensington Gardens. But I saw Highgate cementery, a romantic place, straight out of Edgar Allan Poe. Primrose Hill, which is so pretty and perfect and untouched by any sort of commercial chain that you begin to wonder if you´ll bump into the complete cast of "Love, actually". Hampstead Heath, which is beautiful but freaked me out. I didn´t see one single person in the course of a twenty minute walk, and that´s pretty spooky in a city of many millions.

I won´t pretend, though. When I´m in England it´s the bookshops that lure me in. Especially the second hand ones. I can (and do) spend hours rifling through old stuff, completely lost to the world, loving the musty smell and the quiet.

I like new books very well, too, and there´s no lack of choice there, either. A particulary dangerous place is  Books for cooks . I managed to come out with only three volumes in my hand, which is not so much restrained as downright puritanical. It must be the Plymouth air.

I bought "The Alice B. Toklas cookbook". I´ve heard so much about it, and it looks like something I´ll enjoy a lot, wether I cook from it or not.

"Don´t sweat the aubergine" is a whole book of tips and explanations about techniques. It may sound dull, but I don´t think it is. I hope not, anyway. I havent´realy had time to look at them properly.

The third is called "No place like home". I know nothing of the author, Rowlye Leigh, but he has a chatty, no nonsense air about him. The recipes I probably have already, since they´re basic things, but I love the layout. It´s beautifully illustrated with drawings by Lucinda Rogers.

Just opposite Books for cooks is The Spice Shop. It smells heavenly, is wonderfully stocked, and beautifully decorated it.
I managed to flummox them completely by asking for the one single thing they didn´t have "bak kut teh". It´s an ingredient for a duck soup from  Justin Quek´s amazing book, of which more shortly. I´ll have to do it without this mysterious aromatic.

Nearby was the hummingbird bakery. That´s a dangerous place, too. I wanted everything. In th end, I was saved by the amount of choice. It was impossible to choose, so I settled for the nearest morsel, a pink cupcake. I was so happy on the way back, hugging my new books and wondering if I had icing on the tip of my nose.
Posted by lobstersquad at 6:53 p. m.

cool! I'm heading over in a month... Books for Cooks was already a place on my list, but I'll definitely have to check out your other two recommendations!

Sounds like a few lovely discoveries - it is a good idea to force yourself away from the familiar now and then, so that you can explore new things like these :)

Ahh, sounds perfectly wonderful. Glad to have you back.

I absolutely love London. Hampstead Heath is amazing and strange, I agree. I think I would be in heaven in Books for Cooks.

hey,
bak kut teh - is a mix of herbs. you can get it from any chinese medical store, or in asian grocery stores. it should be in a packet. :)
it's pretty strong tasting. we cook it using pork bones and lots of garlic. and when the soup is ready, we put in pork ribs and eat it with rice, and yao char kway (http://lilyng2000.blogspot.com/2006/03/yau-char-kway-aka-yau-tiew.html)
cheers
sook

You have to try the red velvet cupcake the next time you're at the Hummingbird Bakery - vanilla, slightly chocolate-y sponge with cream cheese frosting. It's my fav cupcake there and I've tried most of them!