The best breakfast in the world. 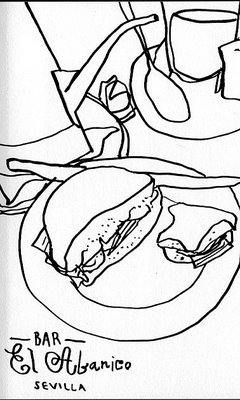 I live in Madrid, as you know. But before, I lived in Sevilla. These two cities are 541 kilometres apart as the car drives, but light years in distance in matters of breakfast.

I´ll defend my home town, Madrid, to the death. I´ll argue that the traffic isn´t so bad, that the fish market is the best in Spain, and that Real Madrid is a team much hated by referees the world over.
But I won´t argue about the breakfast. I´m a breakfast exile. The best breakfast in the world is a thing of the south, and that´s that.

In Madrid, on any given weekday morning, if you go to a café and ask for toast, here´s what will happen : they´ll fling a piece of rectangular plastic bread on the hot-plate, smeared with margarine ( I guess; some kind of yellow fat, anyway), and bring it to you with a little butter and jam. It will be solid, greasy, crispy-soggy and oddly likeable. Or maybe I´m a native, and have built up an inmunity.

In Sevilla, if you ask for toast, you´ll be subjected to a volley of questions, and wonder if perhaps the waiter is a customs officer in disguise.
Will you have half , or a whole piece? Will it be a mollete, boba, pan de pueblo? Will you want it with oil? Will that be garlic oil, or regular? Are you one of those insane people who choose lard for breakfast? Do you want it white or red? Are you perhaps a wimp who favours butter and jam? (If so, I warn you now, it won´t be butter either.)Would you like some ham? Tomatoes?

That may seem like a lot to answer in the morning, but most people know what they want, and just order stacatto-style, like Starbuck´s customers. Mediomolletecontomateyaceiteyuncafeconleche isn´t such a chore to say, after all.

What you get is toast with oil, and maybe ham and sliced tomatoes. It may not sound too exciting, but beleive me, it will be outstanding. The bread is firm and doughy, bland and uninteresting when raw, but it soars above when toasted. It soaks oil, and of course the oil will be good oil, and the ham cut just-so, and in September tomatoes are to die for.

Since this was after the wedding, and I was feeling slightly under the weather (strictly from lack of sleep, of course), I paired it with a Diet-Coke-lots-of-ice-please.

The best breakfast in the world, I´m tellin´ya.

By the way, the drawing was executed on site. It´s a little stark, but you will forgive the blog-verité in view of the circumstances.
Posted by lobstersquad at 5:01 p. m.

mmmm, i do love toast for breakfast tho having some with garlic oil and ham sounds like an incredible change from my whimpy toast with jam. but this morning, toast and jam it will be! yum.

Hey! I´ve just had lunch and I´d kill for a mollete!!! Buuuaaaaa!!! Lucky you!

God save the Mollete!!!!

I love it above all for breakfast in any way, that's one clairly thing I miss from Sevilla.
It's like baggels for new yorkers but with an Olé on it!

Hi Ximena - I love your description - it sounds like you really enjoyed your breakfast. It's very interesting how different regions regard food.

It's a little odd how we don't think to much about different lunch or dinner - those are just differences - but when you start talking about breakfast, people get funny. Breakfast is somehow more specific, right or wrong.
Cute the way you define the differences between two cities in the same country and not too far apart in distance.

Can't wait to get the chance to visit Madrid...

I'm opting for the second (Sevilla) breakfast experience as the kind I'd want - what a delicious account!

that sounds indeed as a very perfect breakfast! =)
really enjoyed your post, you gave me right away such a homey feeling! =)

I like to be prepared should I revisit Spain soon as breakfast is sacred around here! Thanks for the post!

Other good thing about Sevilla is that when you ask for a coffee they give you the coffee AND a glass of water, clever, isn't it? In Madrid I always have to ask for water after my coffee.

xps: ni que decir tiene
kickpleat: I love toast with butter, too, no question
Guru: me too, right now
Guitars...:too right
Gilly: I´m obsessed with how different breakfasts are
Tanna: I´m a breakfast fanatic, as you can see.
Nadiah: I hope you do, it´s a great place.
Ellie: Good, a convert!
Julia: thaks
Bea: do, yes, please.
Le blog: that´s true, hadn´t thought about it.

I would love to try that sort of breakfast. Its definitely a change from the normal eggs on toast.

And by the way i love the picture, there's something immediate about it. Beautiful as always Ximena.

When I was in Sevilla five years ago, I stared incomprehendingly at all these oil-tomato-toasts that people were eating for breakfast. It is one of my great regrets in life that I never pointed over to one of them and said to my waiter, "I'll have what she's having"! And as for your thoughts on the wedding season, I'm with you. It's practically turning me into a cynic, this cycle.

I'm not much of a breakfast person -- usually I like to move directly to lunch. This sounds like a much better breakfast than buttered toast, or even bacon and eggs.

And blog verite? Is a great description.

This does sound like a very interesting breakfast!
I love simple, heavy doughy bread served with good quality olive oil...

I loved the red lard on toast in Sevilla! What was it called in Spanish?