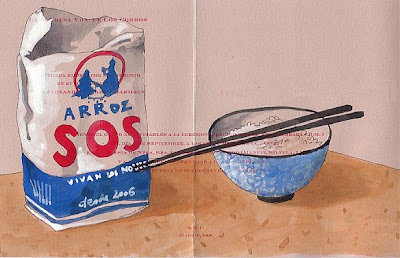 Here´s a good reason to love the pressure cooker; it´s honest, real cooking. There´s nothing gimicky about it. The spectacularly cut-down times only come after you have done all the real work of a recipe, slicing, dicing, browning and sauteeing. So it´s not really less work than the tradtional methods, where you leave things to simmer away on their own for hours. But it does make it possible to make spur of the moment stews and soups and bean salads that you would otherwise have to plan for. And they come out tasting as good or better than the usual.

I´m very impressed with pork shank soup done under an hour, mashed potatoes in ten minutes, and beef stew in half an hour. And note that these are the real times, not just the minutes they spend under pressure, and I factor in the depressure time too. The recipe I´ll give you, though, if for one of my all time favourite puddings, done in record time and much better than the way I used to make it. Please welcome the

Put a walnut sized knob of butter in the open cooker, and turn 60 gr. pudding rice in it until it´s translucent. Add 600 ml. milk and three tablespoonfuls of sugar and bring to the boil with whatever flavouring you like; lemon peel, vanilla, cinnamon. Bear in mind that because no steam escapes flavour is intensified, so use less than you would normally.

Lock, and leave 12 minutes under pressure. Let it come down naturally and put it in a basin to chill. Just made it looks a bit soupy, but after a few hours it´s the creamiest, most delicious pudding, and the rice mantains its bite. Wonderful.

This image is one I´ve used before, in the days before I met my rice cooker and fell in love with it, but that was a long long time ago, and it´s a pretty drawing, no?

I love love love my pressure cooker, but I have not had the best luck with rice in it. I'll certainly try this, though..
thanks...

I tried your stuffed red peppers recipe...and loved it! I'm definately gonna try this one too!Arroz con leche in 10 minutes! the amounts sound perfect, I hate it when they make arroz cooked in milk rather than the creamy thickened milk with just enough rice. Just a doubt: The cooking time you give...is it for a "superfast" pressure cooker (the one with two lines)? or the normal one? I imagine the first, but just to confirm before I get super overcooked rice. Thank you!

Asha: thanks, I definitely will!
Colette: it´s the WMF perfect, the superfast one. Good luck with it, I thought it was brilliant, but arroz con leche is one of those very personal things so who knows. glad you liked the peppers

Hello neighbour, since we're in the same city!

Love your blog- and the illustrations are so playful. Especially when they are of everyday groceries that I see in el mercado.

Hola, just wanted to let you know that I´ve started cooking basmati rice in my pressure cooker. I love it. It´s even better than my tried and trusted microwave method. Bring to pressure, cook for 4 minutes, realease pressure and leave the lid locked in place for a while allow the rice to absorb the steam. Perfect rice, fast and with minimal hassle. I´m amazed!