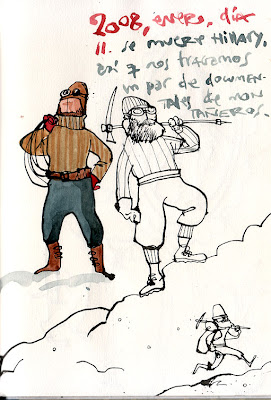 (This post is for my mountaneering friend Simón, who requested the recipe several times in between mouthfuls of cupcake. Hence the non-lemon related drawing.)
Forgive the hubris, but I am proud, proud as in before-a-fall; downright smug, in fact. I can´t help it. These cupcakes are so damn delicious, and I practically invented them!
Ok, invent is a bit of a stretch. But I threw around the ingredients in a way that contradicts that often heard sage advice: "improvise all you like, but never improvise when baking."

I don´t, normally. Part of the pleasure of baking is carefully wheighing out stuff, measuring out the cups, folding just-so, and putting a wet sludge in the oven secure in the knowledge that it will be cake, as promised, in a little while.

But this was Friday morning. I´m always restless on Friday mornings, and don´t really like to work, as there´s little point in handing in stuff that won´t be looked at til Monday, anyway.
But I couldn´t leave the house, as I was waiting for a client to pick up a drawing, and I was prowling like only a caged illustrator can: from the depths of the big armchair by the window. What to do? My mind hit on the last post of my pal Guru, and I thought, aha, cupcakes!

I had fired up the oven and printed out a couple of recipes and tied the apron and warmed the fridge-cold eggs in warm water when I began to realize I didn´t have all the ingredients I needed. Options:
A- dash to the shop and get the required butter and muffin cases
B- brazen it out

You know it´s always going to be B, right?
So anyway, what I did was mix the two muffin recipes in Guru´s blog, more or less. One called for eggs and butter, the other for yogurt. I compromised with less eggs, and since I only had 75 gr. of butter, and had no yogurt, but instead a carton of milk had gone sour, that went in too.
The resulting mix looked curdled and less than fascinating, and I wasn´t sure how the teflon in my Ikea muffin tin would shape up with no liners, but everything was more than fine.
The cupcakes came out whole and golden, with no damage from being naked. The crumb was moist and very flavourful, chock full of lemony egg flavour. A bit coarse, with thickish crumbs that clumped in beautiful small lumps on breaking. Since I still had time on my hands, and icing sugar left over from the biscuit adventures, and lemons from my Absalom days, I iced them.
They looked very pretty, were wolfed down by my near and dear after lunch, and when I made them again on Sunday to clinch the recipe, they received rave reviews, so:

The measures are in cups, but for Spanish eyes, half a cup is 125 ml, or the size of a normal yogurt.

Measure out the flour, salt, baking powder and sugar in one bowl.
In a bigger one, mix the butter, eggs, yogurt and lemon.
Tip the dry stuff into the big bowl and mix, with a very light hand. Better have lumps than overbeat.

Spoon the mixture into the cups, and good luck to you if you think you can do it without spilling stuff between the paper and the tin. Don´t go above two thirds, although you won´t, if you´re dividing evenly.

Bake for 20 or so until golden and puffed up.

Well, at least you have the option of dashing to the shop. I need to be prepared for a much longer walk :)
Great picture, as always!

Yum! I'm craving lemon at this time of year, when all of the food seems so dull and heavy. What's better than cupcakes? And I know just what you mean about Fridays -- for freelancer writers, it's "what's the point?" day, when you know everything will keep just fine until Monday morning!

I'm not usually a great one for cupcakes, but I make an exception for almondy or lemony ones. These sound excellent, and you are very clever to invent your own.

I would love one of these lovely sounding "golden puffs"

Our lemon tree are bursting with lemons and your recipe comes at the perfect time. Thank you!

Lemon cupcakes sounds like music to my hears! That's an awesome recipe - at the moment I have so many lemons that I can't give them away fast enough. I just discovered your blog and it's lovely.

I must have done something wrong... I'm thinking I need to add more baking powder; mine came out almost as flat as hockey pucks!!

Paulova: todo menos que le dé un telele a Simón!
Simonetti: me alegro, my friend, que el pan y agua no pué ser. ENvidia de las cookies de Ben!
White on rice couple: I´m so jealous that yo uhave a lemon tree, that´s so cool!
Bea: they´re pretty tasty, I must say.
Suzana: thanks,glad you found it, and I hope you like it.
Anónimo: I´m so sorry. Mine didn´t rise amazingly, but they definitely crowned above the paper liners. Maybe it´s the baking powder, as you say.